Bree is going to fail out of her Harvard classes if she doesn’t get her grades back up to where they need to be. Roger has discovered that Jamie is alive and living as A.Malcolm in Edinburgh. Bree gives permission for Claire to go through the stones to find him. Claire finally finds Jamie. We finally get the print shop scene that is more of a brothel scene. Claire meets Young Ian and that has kind of set his place in the rest of the series. The last episode ended with Claire being attacked in her room. 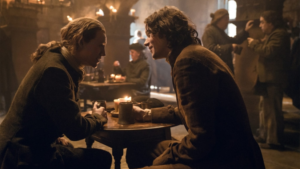 Let’s get on with this week’s episode:

***SPOILER ALERT****
DO NOT CONTINUE IF YOU HAVE NOT WATCHED THE LAST TWO EPISODES (Episodes 6 and 7) OF OUTLANDER.

* Claire is still getting attacked. The assailant tries to rape her but when she cuts him he decides that he will just kill her instead. She knocks him down and he hits his head with a resounding crunch on the hearthstones. Jamie finally comes in and sees her standing over him with dirk in hand. She says she has to try and save his life. Sidenote: Why does she want to save him? I know she has an oath to follow but c’mon. The guy tried to rape her then kill her because she fought with him. This is a step away from the books since this guy gets shot downstairs and dies right there on the spot.

* With this attack, Jamie has to move his product from the basement of the brothel or there will be dire consequences for all involved. While Fergus and Ian find a buyer for the Whiskey, Fergus gives Ian the low down on Auntie Claire. He tells Ian that she is a woman who is not to be crossed.

* Claire is attempting to save her attacker. With the help of Mr. Willoughby, she cuts and drills a burr hole in his head. While they are doing that, Sir Percival shows up for a surprise search of the brothel basement. Sir Percival is defiantly a dude that you really don’t want to mess with or at least his milky-eyed companion isn’t. Remember that guy, he will show up later.

* Jamie returns upstairs and finds that the would-be-attacker has died and Claire is visibly upset about it. Claire packs her doctor bag up and goes to Margaret Campbell’s like she promised Margaret’s brother while line cutting at the apothecary. Claire examines Margaret and prescribes some teas to help her sleep. Her brother tells her that they are sailing to the West Indies the next day. OMG can I just say that the person who plays her is fricking amazing. She makes that character come to life.

* Fergus is in the pub with Ian giving him pointers on the finer art of picking up women and how to do the “deed”. Fergus says that he had a menage a trois when he was 15. The relationship between Ian and Fergus is great. You can tell they are truly friends. Fergus’s pointers must have been spot on because we see Ian taking a girl back to the print shop.

* When Claire gets back she asks about the body. Jamie tells her he packed it in a barrel of Crème de Menthe. He reassures her that no one will find it for a very long time since no Scotsman would drink that. While they are talking, they find out that Old Ian has come looking for his son. Jamie tells him he has no idea where he is even though he does. Shocked by Claire’s appearance, Ian asks Jamie if he has told her yet. Jamie says no but will soon. Once back upstairs Claire is visibly angry over Jamie lying to Old Ian about his son. They get news that there is a fire in the area of the print shop and hurry to check.

* Ian is entertaining the lady back at his uncle’s print shop. In the throws of passion, they hear someone downstairs making a ton of racket. Ian tells the girl to leave and he goes down to investigate. It is the milky-eyed man. He is searching for evidence. Ian and he have a scuffle. They fall against the fake wall and he finds all the evidence he needs with the pamphlets Jamie has been printing. Somehow a fire gets started and Ian is trapped by the fire.

* Jamie charges in to save Ian. I thought that the rescue was super dramatic. I held my breath the whole time. After rescuing Ian from the fire Claire informs Jamie that Ian has to go back home to his parents. Jamie agrees but you can tell he really doesn’t want to.

Oh, this episode was one excitement after another. The new Fergus is finally growing on me. I am still slightly annoyed by the fact that he has a bronze hand and not the hook that he wears in the book. When he did wear a hand it was glove filled with beans/rice/pebbles. Ian’s character is perfect. Maybe not as tall as I imagined but the gangly awkward thing is perfect. I am looking forward to the next episode. Hopefully, there are fireworks as they are set to return to Lallybroch and I think Claire may find out about Laoghaire. What have you loved about the series so far? What have you loathed?

Stay-at-home mom to two children and one toddler. I love to read, travel (haven't done it in a while), and cook. Born and raised in Three Rivers, Michigan and currently, reside in Northern Michigan. Can't wait to start sharing my book thoughts/ reviews with you!!
Previous BOOK REVIEW: Alone by Cyn Balog
Next BOOK REVIEW: Caterpillars Can’t Swim by Liane Shaw 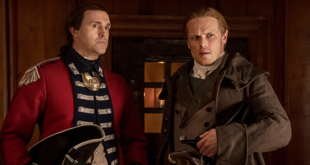 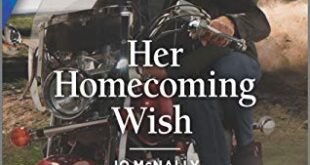 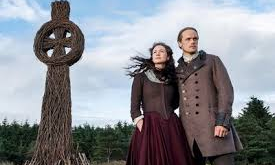