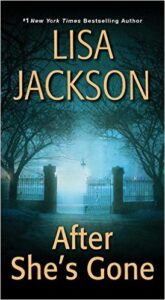 In this explosive new thriller, #1 New York Times bestselling author Lisa Jackson delves into the deep bond between two sisters and their shared dream that becomes a harrowing nightmare of madness, hatred and jealousy…

Cassie Kramer and her younger sister, Allie, learned the hazards of fame long ago. Together, they’d survived the horror of a crazed fan who nearly killed their mother, former Hollywood actress Jenna Hughes. Still, Cassie moved to L.A., urging Allie to follow. As a team, they’d take the town by storm. But Allie, finally free of small-town Oregon, and just that little bit more beautiful, also proved to be more talented—and driven. Where Cassie got bit parts, Allie rose to stardom. But now her body double has been shot on the set of her latest movie—and Allie is missing.

Police discover that the last call to Allie’s phone came from Cassie, though she has no recollection of making it. Instead of looking like a concerned relative, Cassie is starting to look like a suspect—the jealous sister who finally grew sick of playing a supporting role. As the tabloids go into a frenzy, Cassie ends up on a Portland psych ward. Is she just imagining the sinister figure who comes to her bedside, whispering about Allie—a visitor of whom there is no record? Is someone trying to help—or drive her mad?

Convinced she’s the only one who can find Allie, Cassie checks herself out of the hospital. But a sudden slew of macabre murders— each victim masked with a likeness of a member of Cassie’s family—makes Cassie fear for her safety and her sanity. The only way to end the nightmare is to find out what really happened to Allie. And with each discovery, Cassie realizes that no one can be trusted to keep her safe—least of all herself…

Lisa Jackson has always been a great writer, in my opinion. When I picked up “After She’s Gone” I had high hopes for the suspense and thrill I knew Jackson had in her. While I got the suspense and the thrills there were a few parts I could have lived without. This being part of a series, though, definitely drew me in because I wanted to know what was happening next in the lives of the West Coast characters.

The book centered around Cassie Kramer, sister to Allie who has gone missing coincidentally at the same time as a murder happens on the set of the film she was working on. Cassie and Allie fought just before all this so Cassie is the prime suspect. Cassie’s character was incredibly detailed and interesting to me. There was a lot more insight into her life and why she was the way she was. I found myself trying to relate to her and cheer her on. The story did keep me enough interested to keep reading, but it could have been shorter. The first one third of the book was very drawn out. I felt bored at times and had to put it down and come back. The second half to two thirds of the book was much better and flowed fast and intense. I found myself finding a minute here or there to see what was happening.

I also really liked some of the side characters. Trent and Rinko where my favorites. I love the oddball characters and the supporters. With that said, there were a LOT of characters in this book. Not so much too many to keep track of, but a lot where we had to hear from their point-of-view. I don’t know if Jackson was wanting to get the readers thinking about which character was the “bad guy” or to throw us off, but I feel this would have been just as good had the whole story been from Cassie’s point-of-view. Instead we had probably 6-10 different viewpoints throughout and it made it difficult to keep track of who we were at.

With those few things out of the way I still think Jackson wrote a great book. I had an inkling about part of the ending, but definitely not the whole thing. Jackson did a great job of maximizing the suspense as I neared the climax of the book and surprising me a few times with how everything played out. All in all another good piece of work. Three out of Five stars.

“After She’s Gone” is the third book in the West Coast Series by Lisa Jackson. You can pick it up now on Amazon, Barnes and Noble, or your local bookstore. If you haven’t read the rest of this series, start there and work your way up to find out what happens with the Kramer family and more. Make sure to add “After She’s Gone” and other Lisa Jackson books to your To Reads list on Goodreads and leave feedback for Jackson when you are finished. You can also find more out about author Lisa Jackson by visting her site. Rumor is another Grizzly Falls book is coming up next for her. Looking forward to see what happens there as well!

Super Mom and Awesomely Nerdy Lady who can’t stand to sit still. Delving into the online world I ran a successful online radio channel and blog that brought fans up close and personal with their favourite music, television and movie stars. Now, with my hilariously nerdy partners in crime, we are hiding our nerdyness no more! Twitter: @Kristin_Downer
Previous BOOK REVIEW: “Midnight for Charlie Bone” by Jenny Nimmo
Next BOOK REVIEW: “The Assassin Game” Kirsty McKay