BOOK REVIEW: After the Fall by Kate Hart 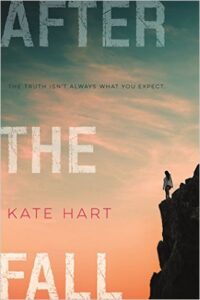 A YA debut about a teen girl who wrestles with rumors, reputation, and her relationships with two brothers.

Seventeen-year-old Raychel is sleeping with two boys: her overachieving best friend Matt…and his slacker brother, Andrew. Raychel sneaks into Matt’s bed after nightmares, but nothing ever happens. He doesn’t even seem to realize she’s a girl, except when he decides she needs rescuing. But Raychel doesn’t want to be his girl anyway. She just needs his support as she deals with the classmate who assaulted her, the constant threat of her family’s eviction, and the dream of college slipping quickly out of reach. Matt tries to help, but he doesn’t really get it… and he’d never understand why she’s fallen into a secret relationship with his brother. The friendships are a precarious balance, and when tragedy strikes, everything falls apart. Raychel has to decide which pieces she can pick up – and which ones are worth putting back together.

An honest start to this review would be to say that the cover drew me in far more than the description. It looks interesting. What was this girl doing on a cliff? What fall is the title referring to? It looks so peaceful. So starting to read i automatically realized that author Kate Hart had a great writing style. The story flowed nicely and had a lot of realistic nuances, behaviors, and personalities that you would see in typical teenagers. After the Fall follows Raychel as she navigates a love triangle, frienships, and tragedy.

While I enjoyed the style writing and the flow of the story, I found the main point of the story that was teased in the synopsis and in the title of the book took a long time to get to. I felt a majority of the book was “before the fall” rather than “after the fall” in the sense this book was referring. It was also a lot of repetitive actions by the teenagers. Typical teenage behavior consisting of hiding things from friends, secret crushes, parties, hating homework, etc. A good 60 percent of the book was the same stuff, although there was a building relationship intertwined in. However the final 40 percent seemed more rushed than it needed to be simply because the rest of the book was the lead up. I would have enjoyed reading more of the struggle following the turning point in the book and seeing how each individual character handled it. However, the time line was more rushed and I felt almost cheated out of those emotions.

Even with the rushed timeline, I felt the characters were an interesting array that matches many different personality types. I love this type of book because everyone reading it can relate to someone. That is one of the most important things for an author to do is give characters that people can enjoy reading about and compare their own life experiences to. While I may not have loved every aspect of this book, I respect Hart’s work and writing and will definitely be looking forward to more of her work. Three out five stars for After the Fall.

Pick up your copy of After the Fall by Kate Hart on January 24, 2017. You can pre-order from Amazon or Barnes and Noble. Also make sure you add the book to your To Reads list for 2017 on Goodreads and leave feedback for the author when you are finished. This is only Hart’s debut novel, so stay tuned for a lot more from her!

Super Mom and Awesomely Nerdy Lady who can’t stand to sit still. I ran a successful online radio show that brought fans up close and personal with their favorite music, television and movie stars. Now, with my hilariously nerdy partners in crime, I have turned to my first love, BOOKS! A lover of books from a young age, I now always have a book on me no matter where I go. Books are my therapy. Twitter: @Kristin_Downer
Previous The Chilbury Ladies’ Choir by Jennifer Ryan
Next BOOK REVIEW: See Me by Nicholas Sparks