BOOK REVIEW: “All These Perfect Strangers” by Aoife Clifford 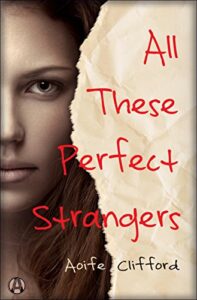 You don’t have to believe in ghosts for the dead to haunt you.

You don’t have to be a murderer to be guilty.

Within six months of Pen Sheppard starting university, three of her new friends are dead. Only Pen knows the reason why.

College life had seemed like a wonderland of sex, drugs and maybe even love. The perfect place to run away from your past and reinvent yourself. But Pen never can run far enough and when friendships are betrayed, her secrets are revealed. The consequences are deadly.

‘This is about three deaths. Actually more, if you go back far enough. I say deaths, but perhaps all of them were murders. It’s a grey area. Murder, like beauty, is in the eye of the beholder. So let’s just call them deaths and say I was involved. This story could be told a hundred different ways.’

‘This is a novel of disquieting intimacy and controlled suspense, Aoife Clifford deftly tightening the screws until we share the narrator’s sense of emotional and physical confinement and the unremitting grip of the past.’ – Garry Disher, author of Bitter Wash Road

**A copy of this book was provided by the author via Netgalley in exchange for an honest review.**

“All These Perfect Strangers” gave me high hopes with a story of past mistakes that come to light, secrets seeping from every corner, and a lot of suspense. While There was a lot of secrets woven throughout the story, I felt the suspense was not quite as high as I was hoping for.

The story follows Pen as she takes off to college after many mistakes in high school that led to a lot of publicity and a costly trial in a small town. Leaving behind the whispers, Pen makes new friends and tries to reinvent where she came from. Unfortunately, as we all know, your past always finds a way to come up. In this case, though, evil seems to follow Pen.

The beginning had me intrigued. The story jumps between current time, to a semester before and back to a little before that. So there are three time lines we get a view from. At times I found this slightly annoying, but the relevance was there, so I couldn’t be too upset. However, when a book is labeled thriller and suspense I expect a lot of it. I want to be on the edge of my seat. Unfortunately I felt the middle of this book dragged on so much that by the time the big climax came I was so ready for anything to happen that I wasn’t all that shocked. The beginning was strong, the middle dragged, and the ending was mediocre. Overall the story was a good one, I just feel like it could have flowed a little faster and smoother to keep the reader (me) more interested throughout.

With that being said, Aoife Clifford is a good writer and the characters left a dark side to them that kept me guessing on who the culprits were. I did find myself playing the “who done it” game almost the entire book even after I was pretty sure I had the answer pegged. So while the book may not be my favorite, I would definitely pick up another book by Aoife Clifford and give her writing another go. Three out of five stars.

Pick up your own copy of “All These Perfect Strangers” by Aoife Clifford and rate it for yourself. You can get a copy on Amazon or Barnes and Noble. Also add it to your To Reads list on Goodreads and leave your feedback for the author when you are finished. You can check out the author herself at AoifeClifford.com to find out more and check out other work and links to social media sites.

Super Mom and Awesomely Nerdy Lady who can’t stand to sit still. I ran a successful online radio show that brought fans up close and personal with their favorite music, television and movie stars. Now, with my hilariously nerdy partners in crime, I have turned to my first love, BOOKS! A lover of books from a young age, I now always have a book on me no matter where I go. Books are my therapy. Twitter: @Kristin_Downer
Previous BOOK REVIEW: “Children of Icarus” by Caighlan Smith
Next BOOK REVIEW: A Certain Slant of Light (Light #1) by Laura Whitcomb