BOOK REVIEW: “An Ember in the Ashes” by Sabaa Tahir 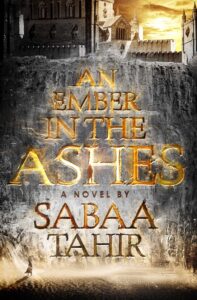 SYNOPSIS: (From Goodreads)
Under the Martial Empire, defiance is met with death. Those who do not vow their blood and bodies to the Emperor risk the execution of their loved ones and the destruction of all they hold dear.

It is in this brutal world, inspired by ancient Rome, that Laia lives with her grandparents and older brother. The family ekes out an existence in the Empire’s impoverished backstreets. They do not challenge the Empire. They’ve seen what happens to those who do.

But when Laia’s brother is arrested for treason, Laia is forced to make a decision. In exchange for help from rebels who promise to rescue her brother, she will risk her life to spy for them from within the Empire’s greatest military academy.

There, Laia meets Elias, the school’s finest soldier—and secretly, its most unwilling. Elias wants only to be free of the tyranny he’s being trained to enforce. He and Laia will soon realize that their destinies are intertwined—and that their choices will change the fate of the Empire itself.

REVIEW:
When I first saw this book I was excited because the cover was awesome and the blurb was amazing. (Be honest, we have all done it.) After reading the reviews I was a little hesitant. Some of the reviews called it a Hunger Games/Divergent sort of book. Yes it has factions: Martial, Tribesman, Augurs and Scholars. Yes it pits Solider against Solider for the Trials to find a new Emperor. Don’t worry, this books has it’s own legs to stand on.

The story opens with Laia and Darin in their grandparent’s house as it is raided by The Martial. Laia watches in horror as the Mask (I’m sorry I giggle every time I read this. All I could think of is Jim Carey) murders her grandparents and takes her brother prisoner because they think he is a spy for the Resistance. She eventually finds the Resistance and goes undercover posing as a slave for the head of the Martials. She does this to free her brother in a bargain with the Resistance. She eventually meets Elias, who is a Mask in training. He doesn’t like the Mask’s ideals and his Mask has yet to meld to his face like the rest of his fellow students. Elias and Laia’s paths cross several more times and they realize their destiny’s are intertwined. I could go on and on about the twists and turns that this book has, but I’ll leave them for you to discover.

The only annoying thing, and I say annoying because its suddenly “wait…what… who’s story is this now”, is it jumps from Elias to Laia for each chapter. After a few chapters however, you get used to it. I will definitely be on the look out for a sequel and I think that once you read this book you will be too.

Make sure to pick up your copy of “An Ember in the Ashes” on Amazon or Barnes and Noble as well as a bookstore near you. You can also add it to your Goodreads TO READ list.

Stay-at-home mom to two children and one toddler. I love to read, travel (haven't done it in a while), and cook. Born and raised in Three Rivers, Michigan and currently, reside in Northern Michigan. Can't wait to start sharing my book thoughts/ reviews with you!!
Previous BOOK REVIEW: “The Heir” by Kiera Cass
Next BOOK REVIEW: “The Last Good Day of the Year” by Jessica Warman