BOOK REVIEW: An Eye for an Eye by Caroline Fardig 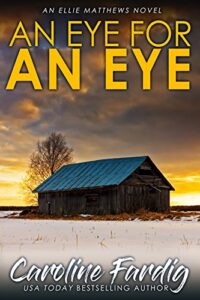 Ellie Matthews is tired of her fifteen minutes of fame. After consulting on a high-profile murder case a few months ago, she wants nothing more than to fade back into obscurity and resume her life as a mild-mannered college professor. But when a family friend goes missing, Ellie finds herself thrust back into the grisly world of crime scene investigation.

It isn’t long before Ellie’s young friend is found murdered and her death is tied to a previously unsolved case. Based on the cryptic poems left on the victims, the department soon realizes that the killer’s vendetta is against them.

It takes all Ellie has to push her personal feelings aside and partner with Detective Nick Baxter one more time. The duo must stop at nothing to catch a vengeful serial killer before it’s too late.

**A copy of this novel was provided by the publisher via NetGalley in exchange for an honest review.**

I want to start out by saying I have not read the first book in the Ellie Matthews series by Caroline Fardig. An Eye for an Eye was the second in the series, but I can assure you that having not read the first one, this one made complete sense. There were a few things I can imagine I would understand better, relationships and such, if I had read the first book, but none of those missing pieces were detrimental to understanding the story. It could be read as a standalone.

An Eye for an Eye follows Ellie Matthews, professor and ex-employee of the police force. When she thinks her life has calmed down is just the time when things pick up. She is dragged back into an investigation that gets very personal, very quickly. Ellie is quick witted, fiercly independent, and insanely protective of those close to her. All those traits come into play as she fights to save the day in this novel. Fardig has given us a character who is emotionally vulnerable and mentally strong beyond normal comprehension for most all at the same time. The complexity of Ellie’s character was nice when the other characters were fairly simplistic It was a good balance. The story had a lot of surprises, twists, and turns. I wouldn’t say I was shocked at the end, but I would not have guessed where it was going earlier on.

My only issue with An Eye for an Eye that I had was at some points it seemed like every horrible thing was tied into this story. Not only was there a kidnap victim and the main line, but Ellie had multiple personal issues that seemed to come out when the story was in a small lull between peak moments, or a crazy, almost unbelievable, spin would pop up and the situation would get so much more worse. I understand things happen and sometimes there is underlying issues in cases like this, but it was like everything horrible that could even potentially be an option was happening. Seemed unrealistic at times.

Although this bothered me, it was not to an extent that had me disliking the story. I enjoyed this mystery and found myself pushing forward every spare moment to find out if the bad guy would come to justice. All in all, Caroline Fardig wrote a great suspense novel that fans of the genre will sufficiently enjoy.

Super Mom and Awesomely Nerdy Lady who can’t stand to sit still. I ran a successful online radio show that brought fans up close and personal with their favorite music, television and movie stars. Now, with my hilariously nerdy partners in crime, I have turned to my first love, BOOKS! A lover of books from a young age, I now always have a book on me no matter where I go. Books are my therapy. Twitter: @Kristin_Downer
Previous BOOK REVIEW: Look For Me by Lisa Gardner (@lisagardnerbks)
Next BOOK REVIEW: The Disturbed Girl’s Dictionary by NoNieqa Ramos