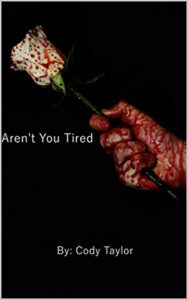 Within the ranks and walls of The Rebellion, no one ever paid Sebastian Samuel Smith a second glance. Then the day came that he rescued a young Daniel Scott from the new world regime that is The First Sons. Nothing could’ve prepared him for what came next.

Cody Taylor is a newer author on my radar and when I heard about his release of Aren’t You Tired, I knew I had to check it out and get a feel for what his writing was like. Aren’t You Tired follows the Story of Sebastian and a little bit of Daniel as they fight through a rebellion with a constant risk of death, while building a friendship that is unbreakable.

Taylor has a good writing style and Aren’t You Tired incorporates a mixture of action and gore with a hint of humor that makes you smirk throughout the book. I liked the way it added a lightness to some pretty intense scenes. I liked the characters of Sebastian, Daniel, and a few of the side characters, I just wish I had more information on them.

That leads to one of my biggest issues with the short story. As a short story, I feel like information needs to be given. The story needs to start with what the point of the book is, who your characters are, and/or what the plot line might be. Aren’t You Tired didn’t do this. The first half of the short story left me feeling a bit confused. While the story was interesting, I had no back story on Sebastian, the Rebellion, what was happening, what they were fighting against, and so on. This short story reminded me of a novella that would be a breakout of a series or book. This story would be incredible if more detail and back story was filled in and it was made into a full size novel to give the reader more to go on and not be so confused. The synopsis didn’t help much in letting you know what you were about to read. A short story needs to have a beginning, middle, and end. This was just a middle with no filler information.

Also, I was not a huge fan of the narrator viewpoint thrown in at times. I liked it more when it was just a 3rd party perspective, but leaving out the narrators own thoughts. It would have flowed smoother in those small spots where those view points were thrown in.

With that being said, the ending of this book was really good and had a poetic like feel to it. It was heartbreaking, action packed, and left me feeling sad for some characters, but like it was a strong wrap up to the short story. The last third of the book was very redeeming for the confusion at the beginning. Again, it would be even better had I had more background and explanation to start with.

I think Cody Taylor has a lot going for him as a writer and I’m looking forward to seeing what more he does going forward. Maybe we will see Aren’t You Tired adapted into a full length novel. I’d be interested to read it. Pretty good work. Check it out if you like lots of action in your reading.

You can pick up your copy of Aren’t You Tired by Cody Taylor on Amazon. Make sure to add it to your To Reads list on Goodreads and leave your feedback for the author when you are finished.

Super Mom and Awesomely Nerdy Lady who can’t stand to sit still. I ran a successful online radio show that brought fans up close and personal with their favorite music, television and movie stars. Now, with my hilariously nerdy partners in crime, I have turned to my first love, BOOKS! A lover of books from a young age, I now always have a book on me no matter where I go. Books are my therapy. Twitter: @Kristin_Downer
Previous BOOK REVIEW: The Disturbed Girl’s Dictionary by NoNieqa Ramos
Next BOOK RESULTS: The Last To Let Go by Amber Smith