BOOK REVIEW: “As You Wish…” by Cary Elwes 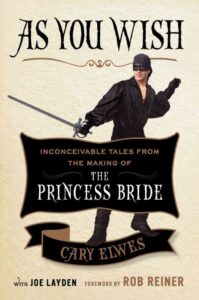 SYNOPSIS: (From Goodreads)
From actor Cary Elwes, who played the iconic role of Westley in The Princess Bride, comes a first-person account and behind-the-scenes look at the making of the cult classic film filled with never-before-told stories, exclusive photographs, and interviews with costars Robin Wright, Wallace Shawn, Billy Crystal, Christopher Guest, and Mandy Patinkin, as well as author and screenwriter William Goldman, producer Norman Lear, and director Rob Reiner.

Cary Elwes was inspired to share his memories and give fans an unprecedented look into the creation of the film while participating in the twenty-fifth anniversary cast reunion. In As You Wish he has created an enchanting experience; in addition to never-before seen photos and interviews with his fellow cast mates, there are plenty of set secrets, backstage stories, and answers to lingering questions about off-screen romances that have plagued fans for years!

With a foreword by Rob Reiner and a limited edition original poster by acclaimed artist Shepard Fairey, As You Wish is a must-have for all fans of this beloved film.

Having been raised on the cult movie classic “The Princess Bride”, I was thrilled when I saw that Cary Elwes wrote a book about it and couldn’t wait to read it. However, having read several books written by actors that have been absolutely horrible (ie: James Franco’s Actors Anonymous) I was a bit hesitant to read it. It takes a special talent to be both a amazing actor and a excellent author, and Cary Elwes does that beautifully.

The story starts out with him telling about Rob Reiner getting the movie off the ground and finding the right cast and crew. From here the book moves on to each of the memorable parts of the movie. How hard they had to train in fencing to get the memorable fight scene just right, the stuntman inside the R.O.U.S (Rodents of Unusual Size), and the different cameos that the movie had from Billy Crystal as Miracle Max to Peter Cook as the Impressive Clergyman. The book also includes little blurbs from various actors, directors and even the writer of the book “The Princess Bride” itself (who also adapted it for the screen). These blurbs coincide with what the chapter is currently about and adds something a little special to the book. As a fan of the movie it was a joy to read a funny and memorable memoir about the making of the movie written by the man who plays Westley. I admit that I watched the movie immediately after finishing the book and enjoyed it on a completely different level.

I enjoyed the book because it gives a behind scenes look at what it takes to make a movie. It also gives it a first person narrative of the movie and its not written in third person. I am not sure what else about the book I can say the title of the book drew me in. If you are a fan of the movie, you would certainly enjoy this book. I read it in two days, it was quick, easy and very engrossing.

You can pick up the book on Amazon, Barnes & Noble, or at your local bookstore. Also make sure to add it to your “TO READ” list on Goodreads.

Stay-at-home mom to two children and one toddler. I love to read, travel (haven't done it in a while), and cook. Born and raised in Three Rivers, Michigan and currently, reside in Northern Michigan. Can't wait to start sharing my book thoughts/ reviews with you!!
Previous BOOK REVIEW: “Adventures of a Lifetime” edited by Janna Graber
Next BOOK REVIEW: “The Lie” by C.L. Taylor