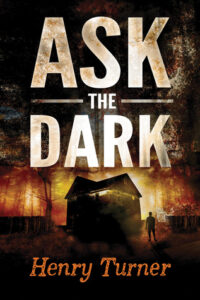 SYNOPSIS: (from Goodreads)
Billy Zeets has a story to tell.

About being a vandal and petty thief.

About missing boys and an elusive killer.

And about what happens if a boy who breaks all the rules is the only person who can piece together the truth.

Gripping and powerful, this masterful debut novel comes to vivid life through the unique voice of a hero as unlikely as he is unforgettable.

Review:
A true redemption story! That is the best way I can explain this book. If you are a fan of books where the underdog gets a little light shined on them, then pick up this book when it comes out. “Ask the Dark” by Henry Turner shows a way to take your past and wipe it clean, yet has a dark story line that would terrify most.

Billy Zeets is a teenage boy who is spending his summer trying to help his father make some money to save their house. While traveling around his small time, Billy comes across some clues that may lead to who has been snatching up local boys… ones Billy knows. Henry took a juvenile delinquent and turned him into a hero. Any teenage boy could relate to this character. It’s a great way to draw in a lot of different types of readers. A true underdog story. Billy Zeets may have done things in his past, but he manages to put together clues based on things he sees just by being observant… and maybe a bit snoopish. Not only that, but he displays a level of courage and bravery most people don’t even have in them in this world.

I found myself reading bits and pieces at moments when I only had two or three minutes to read just because I wanted to see what Billy found next. Henry wrote a character so compelling and interesting you couldn’t help but cheer him on. I wasn’t sure he was going to be able to do it. Not only did he rise up from his past, but he overcame obstacles. Compare it to “the boy who cried wolf”. He had messed up so many times and now nobody would believe him. On top of that, Henry wrote this book from the view of the main character, Billy Zeets, and in his country/southern accent. Which is not an easy one to read, let alone write.

My only complaint is that I knew who did it about halfway through, and so the guessing wasn’t there like other suspense/thriller novels. With that being said, it did add a sense of terror knowing who the bad guy was and wondering if he knew Billy was onto him.

Such an intriguing story, thoroughly engaging, great cover art, and fantastic characters and development. The story flowed smoothly and kept me itching to turn the next page. Fantastic job by Turner. Four out of five stars.

Make sure to pick up “Ask the Dark” on April 7 when it releases. Swing over to Goodreads and mark it TO READ so you don’t forget. You can also pre-order it on Amazon!

Super Mom and Awesomely Nerdy Lady who can’t stand to sit still. I ran a successful online radio show that brought fans up close and personal with their favorite music, television and movie stars. Now, with my hilariously nerdy partners in crime, I have turned to my first love, BOOKS! A lover of books from a young age, I now always have a book on me no matter where I go. Books are my therapy. Twitter: @Kristin_Downer
Previous BOOK REVIEW: “The Nightingale” by Kristin Hannah
Next EXCLUSIVE INTERVIEW: Author Stacey R. Campbell – The Lakeview Series