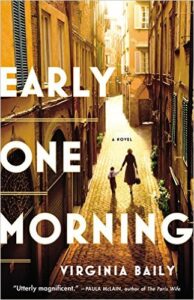 Two women’s decision to save a child during WWII will have powerful reverberations over the years.

Chiara Ravello is about to flee occupied Rome when she locks eyes with a woman being herded on to a truck with her family.

Claiming the woman’s son, Daniele, as her own nephew, Chiara demands his return; only as the trucks depart does she realize what she has done. She is twenty-seven, with a sister who needs her constant care, a hazardous journey ahead, and now a child in her charge.

Several decades later, Chiara lives alone in Rome, a self-contained woman working as a translator. Always in the background is the shadow of Daniele, whose absence and the havoc he wrought on Chiara’s world haunt her. Then she receives a phone call from a teenager claiming to be his daughter, and Chiara knows it is time to face up to the past.

Heart-wrenching and tragic. That’s how Baily’s debut novel Early One Morning begins. Chiara Ravello, the story’s protagonist, does the unthinkable when she saves a young Jewish boy named Daniele from sure death as his family boards a truck to, what is likely, a concentration camp. Claiming the boy as her nephew, though she has no familial connection to him whatsoever, Chiara quickly becomes the kind of character you want to root for. Unfortunately, due to a confusing set-up and an extremely verbose story, I found myself unable to root for Chiara like I thought I might be able to.

Problem number one was the confusing set-up. The chapters alternated between decades. So, one chapter would follow Chiara’s story during the 1940’s (and beyond) as Daniele grew up and she eventually lost touch with him. During these chapters, there were many characters that intersected with Chiara’s life. Her sister, Cecilia, is one example. I found her story line completely unnecessary. I would flat out get irritated anytime she came into play in the novel because, frankly, I felt like I was wasting my time. The other decade that the story bounced between was the 1970’s. These chapters followed the life of a 16 year old girl, Daniele’s daughter Maria. Maria connected with Chiara in the last quarter of the book as she and Chiara both strived to learn more about Daniele and what’s become of him today. I didn’t mind this part of the novel, but I wouldn’t go as far to say I enjoyed what I was reading.

Problem number two was the verbosity of the story. In my opinion, Baily could have easily saved 50+ pages had she cut down on fluffy language and wordy descriptions. This hindered my enjoyment of the book because I found myself re-reading a lot to make sure I was keeping up with the story line and not getting lost in the vocabulary. I do believe there is such a thing as too much description in writing, and unfortunately, that’s how I felt reading this book.

My final criticism of this book is how much of the story centered on Daniele, but how cheated I felt getting to know him as a character. I wish Baily had put more effort into developing Daniele’s character. Since it already followed so many characters, what’s one more? I felt like that would have at least given me, as a reader, some insight into why Chiara and Maria sought after Daniele the way they did. For the most part, it seemed like they were searching for someone unimportant, someone who never really existed at all, due to Baily’s lack of character development.

All in all, if you’re looking for a quick, concise, page-turning read, this is not the book for you. What started as a beautiful idea slowly turned into drudgery. If Baily attempts fiction writing again, I hope her next effort can satisfy more than this one did.

Pick up your copy of “Early One Morning” by Virginia Baily now on Amazon, Barnes and Noble, or a bookstore near you. Also add it to your TO READS list on Goodreads and make sure to leave your feedback for the author on how you liked the book.

BIO: Born and raised in Michigan, Amy is a proud wife, mother, and Christian. She currently teaches 8th grade Language Arts, where she can show her nerdy tendencies in her love for punctuation, book discussions, descriptive words, and parallel structure. She also enjoys reading, shopping, spending time with her family, and eating really delicious food.
Previous BOOK REVIEW: “A Blossom of Bright Light” by Suzanne Chazin
Next BOOK REVIEW: “How To Be Brave” by E. Katherine Kottaras