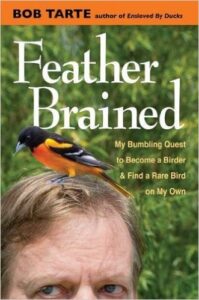 For much of his life, the closest Bob Tarte got to a nature walk was the stroll from parking lot to picnic table on family outings. But then a chance sighting of a dazzling rose-breasted grosbeak in wife-to-be Linda’s backyard prompts a fascination with birds, which he had never cared about before in the least. Soon he is obsessed with spotting more and more of them-the rarer the better-and embarks on a bumpy journey to improve his bumbling birding skills. Along the way, Tarte offers readers a droll look at the pleasures and pitfalls he encounters, introduces a colorful cast of fellow birders from across the country, and travels to some of the premier birding sites in the Midwest, including Point Pelee, Magee Marsh, Tawas Point State Park, and even Muskegon Wastewater System. This funny, heartfelt memoir will appeal to birders of all skill levels as well as to anyone who knows and loves a birder.

When I saw Bob Tarte’s newest book in the Outdoor and Nature section of NetGalley I am pretty sure that I squealed with delight. I quickly checked Goodreads to make sure that I wasn’t seeing things then I promptly hit the “request” button and hoped and prayed that it would get approved. If it didn’t I began to plot my next move. I wondered if I could wear them down by constantly hitting request every time they said no. Fortunately, about three days later I got the approval. I couldn’t wait to read his 4th book!

While the story in here is very subtle, in the end, it’s about him realizing that all the birds in the world won’t be as special to him as the first bird that he and his wife saw when they first started dating. Though it takes the whole book for him to realize that. That being said, this really isn’t a then this happened, then that happened kind of book. It meanders through how he became a bird watcher. Starting from a very young age when he would go bird watching at local tennis courts. Sometimes even getting sworn at by a guy there hitting balls. The book follows him to the man that he is today. He tells of his birding adventures with both his wife and his long time friend, Bill Holm. While Bill claims to be uninterested in birding, he certainly can identify a fair amount of birds. Though according to Bill it is all a result of his special birding juice…also know as Smirnoff Malt. Bob doesn’t ever become the dyed in the wool birder he sometimes hoped to be. He finds his inability to discover and identify some of the birds too frustrating. He does learn that he is the calmest while in the woods. It helps him deal with his sometimes debilitating anxiety attacks that stem from a childhood event.

While this is a good book, it wasn’t one of his best. I live a short distance away from where he does most of his birding and I learned a fair amount about birds that live in my home state of Michigan. A lot of birds that he identifies I had no clue about. Some of the stories are a little long winded but there are funny moments weaved into each of them. As the title of the book states his “Bumbling Quest” he truly does bumble he way through his attempt at becoming a birder but that is what makes him endearing.

You can pre-order a copy of this book on Amazon now or purchase the book when it comes out on April 28, 2016. Also make sure to leave feedback for the author on Goodreads!

Stay-at-home mom to two children and one toddler. I love to read, travel (haven't done it in a while), and cook. Born and raised in Three Rivers, Michigan and currently, reside in Northern Michigan. Can't wait to start sharing my book thoughts/ reviews with you!!
Previous BOOK REVIEW: “No One Knows” by J.T. Ellison
Next BOOK REVIEW: “Trespassing Across America” by Ken Ilgunas