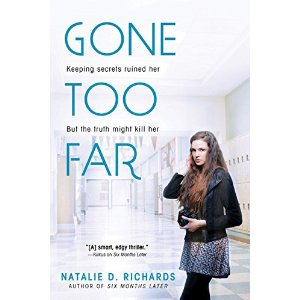 SYNOPSIS: (From Goodreads)
Keeping secrets ruined her life. But the truth might just kill her.

Piper Woods can’t wait for the purgatory of senior year to end. She skirts the fringes of high school like a pro until the morning she finds a notebook with mutilated photographs and a list of student sins. She’s sure the book is too gruesome to be true, until pretty, popular Stella dies after a sex-tape goes viral.

Everyone’s sure it’s suicide, but Piper remembers Stella’s name from the book and begins to suspect something much worse. Drowning in secrets she doesn’t want to keep, Piper’s fears are confirmed when she receives an anonymous text message daring her to make things right. All she needs to do is choose a name, the name of someone who deserves to be punished…

REVIEW:
I knew from the moment I read the description on this book that I would like it. ‘Gone Too Far’ is a book filled with a lot of different scenarios that tug at emotional and physical needs most teenagers have to deal with. Natalie D. Richards, the author of this novel, did a great job of bringing these characters to life and making the story believable and intriguing.

‘Gone to Far’ follows the life of Piper, a high school senior set on moving to New York City to attend New York University and major in Photography. She one day hopes to travel the world, mostly third world countries, and photograph the lives of people and their situations. When piper comes across a book full of secrets and begins to get involved in a sensitive situation, the line between justice and revenge get blurred. Lies, deceit, and blossoming/failing friendships is the central point of this novel.

Richards made Piper very real to me. Thinking back on my days in high school, Piper behaved in a manner very normal for a teenager. Curious and sometimes being just plain nosey end up getting her in a situation she might not be able to get out of. Senior year is a launching point for most teenagers, in my opinion, and Richards drew that out. This was the year for Piper, her best friend Manny, a new male interest, and other friends and family members to make choices and changes in their lives. Become better, or in some cases worse, people. Life-altering decisions were made and Richards managed to draw the reader in and keep us coming back for more. I couldn’t stop thinking about this book between chances I got to read. I wanted to know what was coming and how it would end. That, to me, is the sign of a great writer. The characters were well developed, relateable, interesting, and made decisions that would make you cringe at times. And best yet, I bet you won’t guess who is behind everything until the end! A twist and turn on every page!

While I’ve never read a book by Natalie D. Richards before, ‘Gone Too Far’ has definitely made me a believer in her work and I’ll be picking up more! It’s hard to do… but a definite 5 out of 5 stars. I definitely enjoyed ‘Gone Too Far’.

Super Mom and Awesomely Nerdy Lady who can’t stand to sit still. I ran a successful online radio show that brought fans up close and personal with their favorite music, television and movie stars. Now, with my hilariously nerdy partners in crime, I have turned to my first love, BOOKS! A lover of books from a young age, I now always have a book on me no matter where I go. Books are my therapy. Twitter: @Kristin_Downer
Previous BOOK REVIEW: ‘Who Killed the Candy Lady?: Unwrapping the Unsolved Murder of Helen Brach by James Ylisela Jr.
Next BOOK REVIEW: “Speaking of Murder” By Jonathan Black