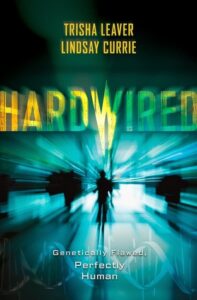 When seventeen-year-old Lucas Marshall tests positive for the M0A1 gene—a genetic abnormality believed to predispose humans toward violence—he is shipped off to an impregnable government facility to undergo a battery of psychological tests aimed at making him crack. Now, having survived their tests and proven his mental stability, Lucas is labeled safe to return home.

But any hope Lucas has of returning to a normal life is shattered when the van transporting him to the reintegration facility is forced off the road by a group of radicals intent on accessing the facility and exposing it’s dehumanizing practices. And Lucas is their ticket through the front door.

Spurred by rumors that the facility is secretly holding one of his old friends captive, Lucas and his bunk mate, Chris, agree to infiltrate the testing facility’s inner sanctum. But once inside, Lucas’s carefully laid plans begin to unravel, and he’s forced to seek help from a group of kids he neither knows nor trusts. And when every genetic test claims your only allies are hardwired to become the next Charles Manson, it’s impossible to know who has your back.

REVIEW:
*A copy of this book was provided by the author in exchange for an honest review.*

I want to start by saying I usually find books written by two authors to be difficult to read. Not because either author is bad, but because each one has their own style and sometimes those two tend to clash. But having read a Trisha Leaver story before, I wanted to give it a try on this one. Plus it sounded interesting and had some great cover art. Leaver and Currie delivered us an action packed story of government control, science, and a story of friendship all mixed into one.

Hardwired follows Lucas, a teen who tested positive for a violence-inducing gene said to cause violent outbursts in humans. Everyone with this gene is put into a special facility to rehabilitate them. But it turns out that those who do get out aren’t all that positive and chummy. Some outsiders make a planned attack on the facility because they do not believe in what scientist and the government say is happening inside.

Basically… lots of action. The first part of the book is a bit slower, in my opinion. It’s a lot of background and story building for what’s to come. While it’s not boring, it’s a bit slower than what you are expecting when going into this book. It picks up nicely in the middle and there are some twists and turns throughout. Some I expected and others completely threw me off guard. I liked the action and the intense, suspenseful moments. I loved the relationship between Lucas and Chris. It was one of the bright spots throughout the book. Their bond kept you hopeful for good things in the end. And I enjoyed the writing style of Leaver and Currie in “Hardwired”. I wished there was more character development, or getting to know a little bit more about who they were and where they came from. There were a lot of characters we met and learned nothing about in the end. Even with those few let downs, this book was a good read and I’d recommend it to someone wanting a little entertainment. Overall, not bad.

Make sure to pick up a copy of Hardwired now in stores and online at Amazon and Barnes and Noble. Also add it to your TO READS list on Goodreads. Make sure to look up Trisha Leaver and Lindsay Currie as they have a lot of other work you can check out and are fantastic writers (as you can tell…)

Super Mom and Awesomely Nerdy Lady who can’t stand to sit still. I ran a successful online radio show that brought fans up close and personal with their favorite music, television and movie stars. Now, with my hilariously nerdy partners in crime, I have turned to my first love, BOOKS! A lover of books from a young age, I now always have a book on me no matter where I go. Books are my therapy. Twitter: @Kristin_Downer
Previous BOOK REVIEW: “For the Right to Learn” by Rebecca Langston-George
Next BOOK REVIEW: “The Standout” by Laurel Osterkamp