BOOK REVIEW: If the Creek Don’t Rise by Leah Weiss 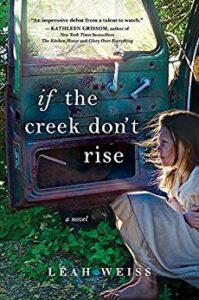 A strikingly sincere portrait of a town and its buried secrets from an outstanding new voice in southern fiction.

In a North Carolina mountain town filled with moonshine and rotten husbands, Sadie Blue is only the latest girl to face a dead-end future at the mercy of a dangerous drunk. She’s been married to Roy Tupkin for fifteen days, and she knows now that she should have listened to the folks who said he was trouble. But when a stranger sweeps in and knocks the world off-kilter for everyone in town, Sadie begins to think there might be more to life than being Roy’s wife.

As stark and magnificent as Appalachia itself, If the Creek Don’t Rise is a bold and beautifully layered debut about a dusty, desperate town finding the inner strength it needs to outrun its demons. The folks of Baines Creek will take you deep into the mountains with heart, honesty, and homegrown grit.

Small town Appalachia in the 1970s. There is not much appeal to the dilapidated town that Weiss creates in this book, except for a few charming characters who live there. I’ll give it to Weiss. She can craft characters who are both lovable and worthy of hatred. This book follows about 10 different characters, with the chapters alternating between them. Just when you get hooked on one character, the story shifts and you are thrust into the life of another. This can be frustrating because you want to read more on one character, but it can also be enticing because it can also make you want to keep going to the next chapter to see how everything fits together. I kind of like stories like that.

So, what worked for me in this book? I was a cheerleader for Sadie Blue. She was such a likable character. I wanted to see her rise above the messiness in her life. I wished for a better tomorrow for her when all seemed bleak. Sadie Blue can give readers hope. I also liked Kate Shaw. Kate sought to inspire others. She was loyal, dedicated, dependable, and, without a doubt, the outsider in the story. Yet over time, she found her place in this menial mountain town with all of the misfit characters who resided there.

On the flipside, what didn’t work for me in this book? I disliked several characters and found it hard to read their stories. I didn’t care for Prudence Perkins, Billy Barnhill, or Roy Tupkin. Ugh, Roy Tupkin was the worst of them all. I know every story seems to have a villainous type, but Roy Tupkin’s abusive, adulterous, and depraved character was pure awful. It’s just sickening to think that his actions are likely modeled after men who have walked similar paths in the real world. All the more reason you’ll want to root for Sadie Blue in this story.
Overall, I liked parts of this book, but there were several parts I found distasteful, even if it is realistic for small town Appalachia in the 1970s. Aren’t there ways authors can get messages across without having to be so graphic at times? And you know the saying that some things are better left unsaid? Well, some things can be better left unread, too. Just because it’s real doesn’t mean that it should make for good reading.

I’m sure a lot of people would really like this entire book, not just some of the characters. But like I said, I’ll be a cheerleader for a character like Sadie Blue, (you will, too!); however, I’m definitely not shaking my pom-poms for this book as a whole. So, this book earns 3 out of 5 stars, in my opinion.

Pick up your copy of If the Creek Don’t Rise by Leah Weiss on Amazon or Barnes and Noble, or find it at a bookstore near you. Make sure you add it to your Goodreads To Read list and leave feedback for the author when you were done.

BIO: Born and raised in Michigan, Amy is a proud wife, mother, and Christian. She currently teaches 8th grade Language Arts, where she can show her nerdy tendencies in her love for punctuation, book discussions, descriptive words, and parallel structure. She also enjoys reading, shopping, spending time with her family, and eating really delicious food.
Previous BOOK REVIEW: The Book of Whispers by Kimberley Starr
Next BOOK REVIEW: Wild Hearts by Lindsay Detwiler and Claire Smith