BOOK REVIEW: “In the Hope of Memories” by Olivia Rivers 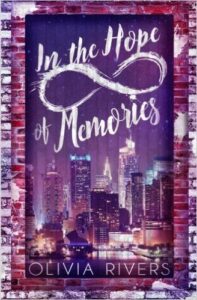 Hope Jackson has lived her short life to the fullest, but her four closest friends are dangling on the brink of disaster. Right before dying of a rare heart condition, Hope sets up a scavenger hunt across New York City using her graffiti art. The directions she leaves her friends are simple: Solve the clues hidden in her art, and they’ll solve the problems haunting their lives.

Two days after her heart fails, Hope’s friends are thrown together:

Aiden, her best friend, whose plans to attend college have been scattered by his OCD.
Kali, her foster sister, whose last ties to sanity are as razor-thin as her anorexic waistline.
Erik, her high school crush, whose success as an athlete is based on a lie with no end in sight.
And Sam, her online pen-pal, whose perfect life exploded into chaos in the aftermath of a school bombing.

Together, the four teens take to the streets of New York to complete Hope’s scavenger hunt and fulfill her dying wishes. But in order to unravel the clues hidden in Hope’s graffiti, her friends will need to confront their personal demons head on.

Hope is within reach.

This. Book. Is. Awesome. For real. In the Hope of Memories tells the story of a young girl named Hope. But it doesn’t tell her story in the way you might think. See, Hope is dead right from the start. But she lives on through her friends and this radical scavenger hunt she sets up for them before she died. She has special messages for each one of them. Through her amazing artwork and personalized notes, her friends learn that Hope still has something she wants to share with each of them.

Erik is the first friend of Hope’s that I met. Erik is portrayed as a typical jock (football, to be specific), but I later found out that he’s much more complex than meets the eye. I think Erik is someone who wants to have life all figured out and handed to him in a pretty little box. He has a blinding issue (pun intended), but he doesn’t want to admit it because if he does, it might actually be true and that scares him to death.

Second, I met Aiden. Aiden is a thinker. Aiden craves logic because logic can explain the unexplainable. Logic can give him answers to what he doesn’t understand. But logic can also drive him crazy. Aiden has OCD and his incessant need to have things in order or to count obsessively, particularly to five, is running, and slowly ruining, his life. He also has a jerk of a father, who drinks too much and looks through him, not at him.

Third, Kali. She is Hope’s sister. Well, not exactly, but growing up in foster care gives Kali connections she never thought possible. Kali and Hope were once inseparable, but something happened to make Kali view Hope differently. Kali said things she didn’t mean, but Hope never let that come between them. Even in her death, she loves Kali and looks out for her. Kali has her own set of problems (don’t we all?) that Hope wants her to face head on because for Kali, it could mean the difference between life and death.

Then, I met Sam. Probably one of the most unique characters I’ve ever read. Sam is a they. Yes, you read that right. A they. Not a he, not a she. A they. At first, it bugged me a little not to know if Sam was a boy or a girl, but later, not so much. See, it didn’t really matter if Sam was a boy or a girl. Sam had a good grasp on reality; they just needed a little push. From Hope. Sam’s chapters were also written in text speech, which, as an English teacher, would normally bother me, but it was great. It was unique. Just like Sam.

And Hope. How could I end without writing about Hope? I enjoyed Hope’s character though she didn’t have an actual physical presence in the story. She was lovable, honest, fun, and spunky. She knew exactly how to touch the innermost parts of each friend’s heart and make them feel alive again. Her scavenger hunt was designed to bring everyone together and fun to figure out with the characters. It’s funny though because, oddly enough, her death made the book come alive. Hmm. Call it luck. Maybe call it fate. But I think I’ll call it what it is. Hope.

If you want to see if you enjoy this book as much as we did, pick up a copy on Amazon or Barnes and Noble now. We also highly encourage you to add it to your To Reads list on Goodreads and leave feedback for the author. You can also check out more about the author Olivia Rivers on her website HERE!

BIO: Born and raised in Michigan, Amy is a proud wife, mother, and Christian. She currently teaches 8th grade Language Arts, where she can show her nerdy tendencies in her love for punctuation, book discussions, descriptive words, and parallel structure. She also enjoys reading, shopping, spending time with her family, and eating really delicious food.
Previous BOOK REVIEW: “Grunt: The Curious Science of Humans at War” by Mary Roach
Next BOOK REVIEW: “Devil and the Blue Bird” by Jennifer Mason-Black