BOOK REVIEW: “Morgue: A Life In Death” by Vincent DiMaio and Ron Franscell 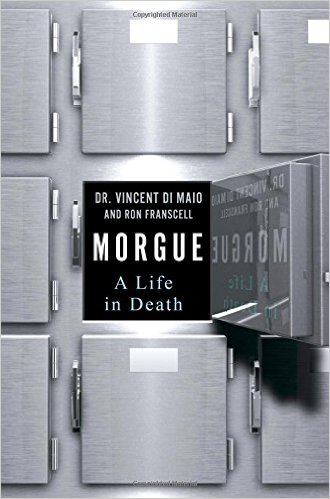 In this clear-eyed, gritty, and enthralling narrative, Dr. Vincent Di Maio and veteran crime writer Ron Franscell guide us behind the morgue doors to tell a fascinating life story through the cases that have made Di Maio famous-from the exhumation of assassin Lee Harvey Oswald to the complex issues in the shooting of Florida teenager Trayvon Martin.

Beginning with his street-smart Italian origins in Brooklyn, the book spans 40 years of work and more than 9,000 autopsies, and Di Maio’s eventual rise into the pantheon of forensic scientists. One of the country’s most methodical and intuitive criminal pathologists will dissect himself, maintaining a nearly continuous flow of suspenseful stories, revealing anecdotes, and enough macabre insider details to rivet the most fervent crime fans.

The title of this book drew me in. To me, it has two meanings. The author finds out what happened in a persons’ life that caused their death. Secondly, it reminds us that people make it their life’s work to find out how people died. There are only 500 Registered Medical Examiners in the USA today. This is not nearly enough. If money, time, etc where no problem, my ultimate dream would be to become a Medical Examiner. I even went as far to look up a school and decided on University of Tennessee, Knoxville. While it’s still just a dream, who knows, one day it might just come true.

The first chapter opens with a boom. The first case he discusses is the Trayvon Martin and George Zimmerman Case. In a royal battle of did he or didn’t he, the autopsy is the only thing that tells the truth. The last case he discusses is Vincent Van Gough and did he really commit suicide like everyone thinks. According to Dr. Di Maio, the author, he highly doubts it. Based on the size of the entrance wound and the lack of powder burn on his hand and side there is no way that he could have shot himself. This book is very, very interesting. It is suspenseful and just about every case weaves the right amount of mystery. It keeps you turning the pages. It does deal with some medical knowledge but he is very good at explaining it to people so that a layman could understand it. He talks about multiple cases that he has either done the autopsy on or has consulted on to give an unbiased opinion. The most interesting case, aside from the Van Gough, was one where he exhumes Lee Harvey Oswald to see if he is actually in the grave or, as the conspiracy theorists believe, it was a Russian spy. I had no clue about that part of the story. I knew about JFK getting assassinated and Oswald getting shot by Jack Ruby as he was being escorted by officers. It offered a whole new perspective.

This book is very well written. He knows his stuff. As he says in the book, “I have performed more than 9,000 autopsies, examined over 25,000 deaths and continued to consult on unexplained or questionable death cases all over the world.” To say that he is good at his job is an understatement. The only parts that really got to me in this book were the three cases that he discusses that involve deaths of children. The mother that was killing children once they no longer “needed her”, the nurse that was injecting a paralytic into kids, and the “West Memphis Three” Case. They were disturbing and made me hug my three girls extra hard at night. But those cases were just a tip of the iceberg in this book. I spent several nights up way later than I should have. Just one more page!

Please pick up a copy of this book on Amazon or Barnes and Noble. Also leave your feedback for the author on Goodreads and add it to your To Read list so as not to forget!

Stay-at-home mom to two children and one toddler. I love to read, travel (haven't done it in a while), and cook. Born and raised in Three Rivers, Michigan and currently, reside in Northern Michigan. Can't wait to start sharing my book thoughts/ reviews with you!!
Previous BOOK REVIEW: “Tragedy Girl” by Christine Hurley Deriso
Next BOOK REVIEW: “Every Heart a Doorway” by Seanan McGuire