BOOK REVIEW: “My Kind of Crazy” by Robin Reul 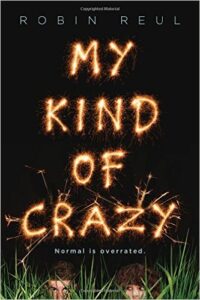 Despite the best of intentions, seventeen-year old, wisecracking Hank Kirby can’t quite seem to catch a break. It’s not that he means to screw things up all the time, it just happens. A lot. Case in point: his attempt to ask out the girl he likes literally goes up in flames when he spells “Prom” in sparklers on her lawn…and nearly burns down her house.

As if that wasn’t bad enough, Peyton Breedlove, a brooding loner and budding pyromaniac, witnesses the whole thing. Much to Hank’s dismay, Peyton takes an interest in him—and his “work.” The two are thrust into an unusual friendship, but their boundaries are tested when Hank learns that Peyton is hiding some dark secrets, secrets that may change everything he thought he knew about Peyton.

Some books are all sunshine, roses, happy families and happy people. This is not one of those books. Both characters come from troubled backgrounds. Hank’s mother and older brother were killed in a car accident when he was 12 and his father has fallen into a never-ending beer bottle. Peyton’s father left them some time ago and she lives with her mother and her mother’s deadbeat, abusive boyfriend. I am not saying this to turn you off of the book. While it is slightly depressing to read about the characters backgrounds, the author has woven a good story between these two characters.

The story begins as Hank is setting sparklers alight in the popular girl’s lawn spelling out ‘PROM’. What he doesn’t count on is the pine mulch catching fire and setting half her lawn and a tree on fire. He panics and quickly pedals away as he hears the fire department approach. He doesn’t think that he had anyone witness his failed attempt at romance. In steps Peyton. She is a pyromaniac who happened to witness the whole thing from her house across the street. She also found the missing box of sparklers that Hank inadvertently left behind in his hasty retreat from the scene of the crime. When he goes back to retrieve the missing box, Peyton approaches him with the evidence. Peyton then becomes a friend of sorts. She starts setting fire to papers at school so Hank and his friend Nick can skip class and they can hang out. Eventually, Hank shows Peyton his comic book that he has been working on for a long time. First working with his brother and then, after his brother died, he found the urge to continue the work alone. One day, Hank’s dad loses his job at a local factory for being caught “drinking on the job”. At the same time, Peyton shows up with a split lip, black eye, and horribly cut hair. She tells him that her mother did it but in reality, she has a secret that will test their relationship to the breaking point.

This book was good but it wasn’t a rip-roaring page turner. It was a little on the disturbing side with its alcoholic father, the abusive mother and mental disorder of the one main character. It also had a bit of a “wow, yet another bad thing happened to the characters” feel to it. A few reviews I have read of this book said that people laughed so hard that they cried. I didn’t have that problem. Don’t get me wrong, I really enjoyed the story and the relationship the author created between the main characters. However, I felt that it ended far too soon and we never found out what happened to Hank and Peyton after they went off to college. I enjoyed it enough I will keep a lookout for another book by the author. Who knows, maybe she will have a follow up to the book and we can continue the story.

You can get your own copy of “My Kind of Crazy” on Amazon and Barnes and Noble for pre-order. The book releases officially April 5, 2016. Also make sure to add “My Kind of Crazy” to your To Reads shelf on Goodreads and, as always, please leave your feedback for the author when you finish! You can follow the author, Robin Reul, on twitter @Robinreul.

Stay-at-home mom to two children and one toddler. I love to read, travel (haven't done it in a while), and cook. Born and raised in Three Rivers, Michigan and currently, reside in Northern Michigan. Can't wait to start sharing my book thoughts/ reviews with you!!
Previous BOOK REVIEW: “The Lie Tree” By Frances Hardinge
Next BOOK REVIEW: “Black Box” by Julie Schumacher