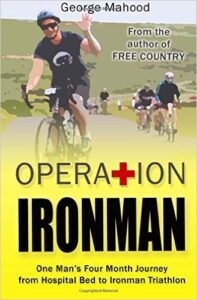 Operation Ironman follows George Mahood’s inspiring and entertaining journey from a hospital bed to an Ironman triathlon. After major surgery to remove a spinal cord tumour, George set himself the ultimate challenge –
a 2.4 mile swim,
a 112 mile bike ride,
and a 26.2 mile run,
all to be completed within 16 hours.
He couldn’t swim more than a length of front crawl, he had never ridden a proper road bike, and he had not run further than 10k in 18 months.
He had four months to prepare.
Could he do it?

When life throws something bad at you, you can either wallow in self-pity or you can take it as a opportunity to change yourself for the better. That is exactly what the author did. He challenged himself and (spoiler alert) he came, he saw and he conquered.

When the author, George Mahood, started to experience back pain he chalked it up to a pulled muscle or generally overdoing it. When it didn’t go away he went to the doctor to find out what the problem was. After multiple tests, they told him that he had a tumor growing within his spinal cord. His GP first suggested that surgery was not a good option due to the amount of issues that could arise. After trying to wait it out, the symptoms became unbearable. He decided to have surgery to remove the tumor. While laying flat on his back in the hospital recovering, he decided that he was going to do a Ironman (2.4 miles swimming, 112 miles biking, 26.2 miles running) in order to get himself into better shape. He signed up and set a goal of September to run it. This gave him a little over 4 months to train and get into shape. He could barely swim, never rode a bike in a competitive manner, and hadn’t run anything greater than a 10K in over 18 months. But his mind was made up.

He starts his training in a piecemeal fashion. He doesn’t follow any sort of diet plan and does really the bare minimum that he needs to train. He does participate in a race with his wife but that doesn’t go as planned. He likes running with her but she on the other hand cannot stand it. He goes to the local pool to get some help with his swimming. The thing that he trains the most is the biking. He participates in RideLondon 2015, a 100 mile ride that goes from London out to Surrey and ends back in London. He rides that Coast to Coast Trail from Plymouth to Ilfracombe. I could ramble on about the book because I enjoyed every moment of it but I think that will give the gist.

I really enjoy this author. This is the 4th book that I have read by him. I bought the book the moment I saw that it was out on Amazon. His writing style flows well and it feels like he is actually telling you the story personally. Read this book then go read his other three. I cannot wait for the next one to come out.

You can pick up George Mahood’s “Operation Ironman” on Amazon! Make sure to also add it to your To Reads list on Goodreads and leave your comments when you are done!

Stay-at-home mom to two children and one toddler. I love to read, travel (haven't done it in a while), and cook. Born and raised in Three Rivers, Michigan and currently, reside in Northern Michigan. Can't wait to start sharing my book thoughts/ reviews with you!!
Previous Favorite Books of 2015
Next BOOK REVIEW: “Ugly Love” By Colleen Hoover