BOOK REVIEW: Right Behind You by Lisa Gardner 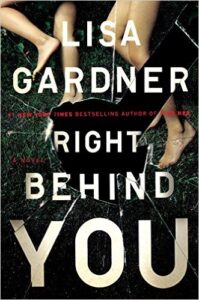 Eight years ago, Sharlah May Nash’s older brother beat their drunken father to death with a baseball bat in order to save both of their lives. Now thirteen years old, Sharlah has finally moved on. About to be adopted by retired FBI profiler Pierce Quincy and his partner, Rainie Conner, Sharlah loves one thing best about her new family: They are all experts on monsters.

Is he a killer?

Then the call comes in. A double murder at a local gas station, followed by reports of an armed suspect shooting his way through the wilds of Oregon. As Quincy and Rainie race to assist, they are forced to confront mounting evidence: The shooter may very well be Sharlah’s older brother, Telly Ray Nash, and it appears his killing spree has only just begun.

All she knows for sure: He’s back.

As the clock winds down on a massive hunt for Telly, Quincy and Rainie must answer two critical questions: Why after eight years has this young man started killing again? And what does this mean for Sharlah? Once upon a time, Sharlah’s big brother saved her life. Now, she has two questions of her own: Is her brother a hero or a killer? And how much will it cost her new family before they learn the final, shattering truth? Because as Sharlah knows all too well, the biggest danger is the one standing right behind you.

Lisa Gardner is at it again with her upcoming novel Right Behind You. I could easily write this review with a simple ‘I love it’ and ‘Read it!” but I’m sure you want more.

Right Behind You follows the story of multiple people, but centers on Quincy and Rainie, long time characters in some of Gardner’s books. Quincy and Rainie are assisting in an investigation of a 17 year-old boy who has been said to be on a mass murder spree in a fit of rage. But is he? This novel has so many twists and turns to keep you guessing! I love Lisa Gardner because she always keeps me on my toes. I have never been able to guess the outcome of her books until the very end. Right Behind You was no different. Along with getting to spend some quality, stressful time with fan favorites Quincy and Rainie, but we also get to know other supporting characters much better, including their soon-to-be adopted daughter Sharlah who turns out to have a little more at stake in this story than originally thought.

I love how Quincy and Rainie are these great parents and profilers, but also have so many flaws and parts of them they are constantly working on to be better. It shows a truth to the world that everyone has problems and struggles. That was a huge part of this novel, getting to see those struggles come to light and how they cope with them. Kept the book flowing in between the high suspense man hunt moment. Gardner’s characters are always well developed and each time you read a new book you learn a little more about them. Not only are the characters fun to read, but the story is unique. Gardner is always coming up with insane stories that are terrifyingly possible in real life, which makes them more engulfing. Once I picked it up, I couldn’t put it down.

I’ve said it multiple times, but Lisa Gardner is hands down one of the best Mystery/Thrill writers in the world. As my favorite genre of book, I’ve read a lot and she wins out every single time. Pick this book up and kick of 2017 right with a great read! Right Behind You will leave you itching for more and dying to know who did it. Five out five stars well deserved.

Right Behind You by Lisa Gardner is available January 31, 2017, It is available for pre-order now. Make sure to go reserve your copy on Barnes and Noble or Amazon. It will also be available to you at your local book store on release day. Make sure to add it to your Goodreads To Read list and leave your feedback for Gardner when you are done reading. If you want more books from Lisa Gardner (and there are a lot… you will never be bored!) check out her website HERE! Make sure you submit you and your friend for a “Kill a Friend, Maim a Buddy” Sweepstakes on her site! Also follow her on twitter @lisagardnerbks

You can also check out my review of Gardner’s most recent short story ‘The 4th Man’ HERE!

Super Mom and Awesomely Nerdy Lady who can’t stand to sit still. I ran a successful online radio show that brought fans up close and personal with their favorite music, television and movie stars. Now, with my hilariously nerdy partners in crime, I have turned to my first love, BOOKS! A lover of books from a young age, I now always have a book on me no matter where I go. Books are my therapy. Twitter: @Kristin_Downer
Previous BOOK REVIEW: The Chloe By Design Book Series by by Margaret Gurevich and Brooke Hagel
Next BOOK REVIEW: The Du Lac Devil (The Du Lac Chronicles #2) by Mary Anne Yarde