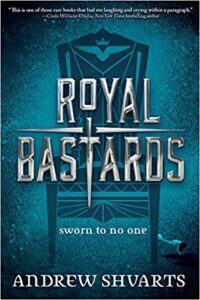 Being a bastard blows. Tilla would know. Her father, Lord Kent of the Western Province, loved her as a child, but cast her aside as soon as he had trueborn children.

At sixteen, Tilla spends her days exploring long-forgotten tunnels beneath the castle with her stablehand half brother, Jax, and her nights drinking with the servants, passing out on Jax’s floor while her castle bedroom collects dust. Tilla secretly longs to sit by her father’s side, resplendent in a sparkling gown, enjoying feasts with the rest of the family. Instead, she sits with the other bastards, like Miles of House Hampstedt, an awkward scholar who’s been in love with Tilla since they were children.

Then, at a feast honoring the visiting princess Lyriana, the royal shocks everyone by choosing to sit at the Bastards’ Table. Before she knows it, Tilla is leading the sheltered princess on a late-night escapade. Along with Jax, Miles, and fellow bastard Zell, a Zitochi warrior from the north, they stumble upon a crime they were never meant to witness.

Rebellion is brewing in the west, and a brutal coup leaves Lyriana’s uncle, the Royal Archmagus, dead—with Lyriana next on the list. The group flees for their lives, relentlessly pursued by murderous mercenaries; their own parents have put a price on their heads to prevent the king and his powerful Royal Mages from discovering their treachery.

The bastards band together, realizing they alone have the power to prevent a civil war that will tear their kingdom apart—if they can warn the king in time. And if they can survive the journey . . .

**A copy of this book was provided by the publisher via Netgalley, in exchange for an honest review.**

I am not sure what drew me to this book. The title certainly helped. The cover not so much it was a rather bland picture of a throne. I think the biggest draw was the actual description. A “bastard” daughter of Lord Kent. Witness the crime of horrible proportions committed by her father. One of the other reasons is the fact that it was a book published by Disney. I have never read a book published by them. They really have never been on my radar and I didn’t know they had their own publishing company.

The book opens with Tillandra (“Tilla”) and her half-brother Jax standing in a tower watching and waiting for Princess Lyriana to come to Castle Waverly. Tilla is the bastard daughter of Lord Kent and a castle servant. Jax is the son of the castle servant and traveling soldier. Tilla was the apple of her father’s eye until he married and had legitimate children of his own. Suddenly, Jax and Tilla see the carriage approaching and, to their dismay, they cannot see the Princess through all the gauzy curtains and guards. They return to the castle through the tunnels under the castle that no one but them uses. They know them like the back of their hand. Jax returns to the stables and Tilla goes to her dusty room. She dresses and heads down to the feast being held in the honor of the Princess. She is dreading going down as she has to sit at the bastards table at the very back of the room. She is joined by her annoying friend Miles. After she settles herself in her seat the Zitochi arrive in the hall. To her surprise, one of the men come her way and sits with them. His name is Zell. He is dark, brooding and handsome. Suddenly, Princess Lyriana enters. She demands that she sit with the bastards. This causes quite a stir. Princess Lyriana states she wants to see the ocean. Miles offers that Tilla will take her since she knows the way to sneak out of the castle. Tilla grudgingly agrees. Zell asks to go along as well. They sneak out and, before they reach the ocean, they hear voices. Zell’s father, Miles mother, Tilla’s father and Lyriana’s uncle are all on the beach. Suddenly, Lord Kent kills Lyriana’s uncle. Kills him in cold blood for his own dark reasons. They are seen and a pursuit ensues. Will they make it to safety before being caught? Will they be betrayed by someone they know?

Spoiler: I read this book in 1 day. It was that good. Ok, I did stay up waaaaayyyy to late reading it but I just couldn’t put it down. I wanted more. The book is directed towards 14-18-year-olds but that means nothing in my mind. A good book is a good book. This book left me wanting more. Thankfully it is book 1 of a trilogy! The author did an excellent job of giving you a roller coaster ride of feelings. The aww when characters finally kiss. Tears when something sad happens. Shock and awe when you realize what is actually happening. It has action, adventure, romance, camaraderie, true friendship, and magic. I can’t wait until the next book is out. I will definitely be keeping my eyes out for it.

Pick up your copy of Royal Bastards, available now, from Amazon, Barnes and Noble, or a bookstore near you. You can check out more from author Andrew Shvarts and keep tabs on upcoming books and projects at his website.

Stay-at-home mom to two children and one toddler. I love to read, travel (haven't done it in a while), and cook. Born and raised in Three Rivers, Michigan and currently, reside in Northern Michigan. Can't wait to start sharing my book thoughts/ reviews with you!!
Previous OPINION: How a Show Can Change a Life
Next BOOK REVIEW: Toward a Secret Sky by Heather Maclean