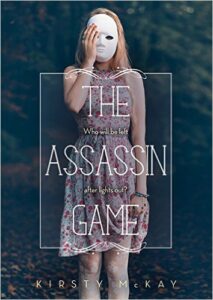 Who will be left after lights out?

At Cate’s isolated boarding school, Killer is more than a game—it’s an elite secret society. Members must avoid being “Killed” during a series of thrilling pranks, and only the Game Master knows who the “Killer” is. When Cate’s finally invited to join the Assassins’ Guild, she know it’s her ticket to finally feeling like she belongs.

But when the game becomes all too real, the school threatens to shut it down. Cate will do anything to keep playing and save the Guild. But can she find the real assassin before she’s the next target?

I am wildly impressed with Kirsty McKay’s novel “The Assassin Game”. She took us to a place a lot of us have never had the chance to go and told us a story that kept us on the edge of our seats.

The story follows Cate as she embarks on a game at her boarding school called “Killer”. Kids spend years hoping to be picked for the game. But this year the game turns out to have a little twist, and not a good one. When bad things start happening to the kids playing the game everyone goes on high alert trying to figure out who is behind the acts before it ends up too late.

I will say the beginning of the book had me questioning what was happening. It didn’t get right to the good stuff, but built up slowly. “The Assassin Game” was more like a dynamite with a long wick and the whole novel was us knowing it was going to explode, but not sure when it would happen. There was a sense of suspense throughout as we wait for all the bad things to come to a head. Not only that, but there were all the kids we remembered growing up. This boarding school was for the gifted, smart, and excessively talented individuals, but there was still the “popular girls” and the head boys. There was also the mediocre students, the “hot” boy. This is a school that you could use your imagination and become one with. McKay made the story relatable to anyone reading and that is a huge bonus, in my opinion, for any author.

While the story ran just shy of a five star rating for me because of the slow build at the beginning, I still will say that this was a great story with well developed characters. McKay has a writing style that gives you the details, but not so many that you get bored with the story and keeps you guessing. I will definitely be checking out the next novel by McKay as soon as it’s out. Four out of five stars.

Pick up your copy of The Assassin Game by Kirsty McKay on Amazon and Barnes and Noble. Also make sure to leave feedback for the author and add it to your To Reads list on Goodreads now. Also follow author Kirsty McKay on twitter for updates on all her books @KirkyBean.

Super Mom and Awesomely Nerdy Lady who can’t stand to sit still. I ran a successful online radio show that brought fans up close and personal with their favorite music, television and movie stars. Now, with my hilariously nerdy partners in crime, I have turned to my first love, BOOKS! A lover of books from a young age, I now always have a book on me no matter where I go. Books are my therapy. Twitter: @Kristin_Downer
Previous BOOK REVIEW: “After She’s Gone” by Lisa Jackson
Next BOOK REVIEW: “Kissing In America” by Margo Robb