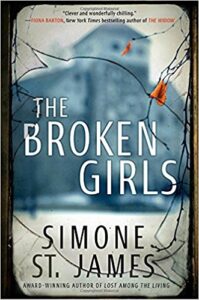 Vermont, 1950. There’s a place for the girls whom no one wants–the troublemakers, the illegitimate, the too smart for their own good. It’s called Idlewild Hall. And in the small town where it’s located, there are rumors that the boarding school is haunted. Four roommates bond over their whispered fears, their budding friendship blossoming–until one of them mysteriously disappears. . . .

Vermont, 2014. As much as she’s tried, journalist Fiona Sheridan cannot stop revisiting the events surrounding her older sister’s death. Twenty years ago, her body was found lying in the overgrown fields near the ruins of Idlewild Hall. And though her sister’s boyfriend was tried and convicted of murder, Fiona can’t shake the suspicion that something was never right about the case.

When Fiona discovers that Idlewild Hall is being restored by an anonymous benefactor, she decides to write a story about it. But a shocking discovery during the renovations will link the loss of her sister to secrets that were meant to stay hidden in the past–and a voice that won’t be silenced. . . .

The Broken Girls is a bone chilling, spine tingling psychological thriller that will leave your head spinning at the end with all of it’s revelations.

We follow Fiona Sheridan, journalist, daughter to another well-known journalist, and sister to deceased Deb, found murdered on the property of the old Idlewild Hall. She had never gotten over her sisters death even though the killer had been caught. When she finds out Idlewild Hall is being restored, she sees a story that needs telling. However, in the process of researching this story she finds herself deeper and deeper in a web of secrets, lies, and danger.

The beginning of the story was slow. I found myself wishing it would pick up. The story was jumping between years and I was trying to wrap my head around what was going on and why these two stories that appeared to be separate were going to tie together. That feeling of reading two different stories continued throughout the book but, as it got into the story more, you could slowly tie pieces together and see that somehow, someway it was going to tie up in a bow in the end. I was not a big fan of the ghost story vibe in the beginning, but I later figured out that it wasn’t the center of the story and it was just that added creepiness that gave more body to the story. More interesting backstories. It really helped round out the edges of the story, even though it was not the primary focus. This is not just a ghost story. It is so much more than that.

St. James did a great job of developing these characters at a slower pace with the use of flashbacks, moments of clarity, and a show of emotions. We got to learn about the characters from both 2014 and 1950 that was like a a slow build to a peak of their high point or most important decision. I loved Fiona and her independence. She was someone you could relate to on certain levels, but also someone you hoped to be like. That strength she carried even when the world had beat her down over the years was inspiring.

Simone St. James wrote a fantastic mystery novel that will literally keep you guessing until the very end. This is the book for mystery, suspense lovers everywhere. Everyone make sure to check it out.

The Broken Girls by Simone St. James is now available on Amazon, Barnes & Noble, and a bookstore near you. Make sure to pick up a copy. Also add it to your To Reads list on Goodreads and leave your feedback for the author when you are finished. You can check out more work from author Simone St. James on her website here.

Super Mom and Awesomely Nerdy Lady who can’t stand to sit still. I ran a successful online radio show that brought fans up close and personal with their favorite music, television and movie stars. Now, with my hilariously nerdy partners in crime, I have turned to my first love, BOOKS! A lover of books from a young age, I now always have a book on me no matter where I go. Books are my therapy. Twitter: @Kristin_Downer
Previous BOOK REVIEW: The Spirit Photographer: A Novel by Jon Michael Varese
Next BOOK REVIEW: No Spot on Earth More Lovely: The Landscapes that Inspired Anne of Green Gables by Catherine Reid and Kerry Michaels