BOOK REVIEW: The Edge of Everything by Jeff Giles 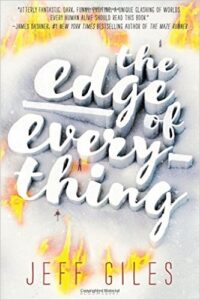 It’s been a shattering year for seventeen-year-old Zoe, who’s still reeling from her father’s shockingly sudden death in a caving accident and her neighbors’ mysterious disappearance from their own home. Then on a terrifying sub-zero, blizzardy night in Montana, she and her brother are brutally attacked in a cabin in the woods–only to be rescued by a mysterious bounty hunter they call X.

X is no ordinary bounty hunter. He is from a hell called the Lowlands, sent to claim the soul of Zoe’s evil attacker and others like him. Forbidden to reveal himself to anyone other than his victims, X casts aside the Lowlands’ rules for Zoe. As X and Zoe learn more about their different worlds, they begin to question the past, their fate, and their future. But escaping the Lowlands and the ties that bind X might mean the ultimate sacrifice for both of them.

Let’s start out by saying I am not typically a fantasy fan. Not that it’s not good. More so that it’s not really my thing. However, the plot sounded interesting and I love stepping outside my comfort zone to experience new types of literature. The Edge of Everything follows Zoe as she meets X, who happens to be a member of the Lowlands, and their tumultuous relationship.

The idea behind the story was interesting, but I feel that the beginning didn’t get the point across very well. The beginning was choppy, not flowing well at all, and confusing. There was very little explanation about X, and maybe that was author Jeff Giles’ idea to keep the reader in the dark much like the characters, but I found it frustrating when trying to understand where this book was going. Zoe was a typical teenager girl and her character was done well. She was emotional, attached, and trying to figure out what exactly she wanted in life. I think many readers can relate to that. Even though the beginning and most of the middle of the book was confusing, choppy, and moved slowly, the end of the book kept me intrigued. I read the last 20 percent of the book quickly and found myself really wanting to know what happen. Had the rest of the book been like that I would have been much happier. I was a little disappointed in the ending because it left things hanging a little, but not quite a full-on cliffhanger. I would have liked more of a closing unless a confirmed book two was already ready to come out in the next year. If a second book comes out I would be willing to check it out in hopes that the next book flows a lot like the end of The Edge of Everything.

With everything said, I give The Edge of Everything by Jeff Giles a three out of five stars, with the end redeeming it a bit.

The Edge of Everything by Jeff Giles is available on Amazon and Barnes and Noble on January 31st. Make sure you don’t forget about it by adding it to your To Reads list on Goodreads and leave your own feedback for the author when you are finished.

Super Mom and Awesomely Nerdy Lady who can’t stand to sit still. I ran a successful online radio show that brought fans up close and personal with their favorite music, television and movie stars. Now, with my hilariously nerdy partners in crime, I have turned to my first love, BOOKS! A lover of books from a young age, I now always have a book on me no matter where I go. Books are my therapy. Twitter: @Kristin_Downer
Previous BOOK REVIEW: Juliet’s Answer by Glenn Dixon
Next BOOK REVIEW: Escaping the Nazis on the Kindertransport by Emma Carlson Berne