BOOK REVIEW: The Green Reaper: Memoirs of an Eco-Mortician by Elizabeth Fournier 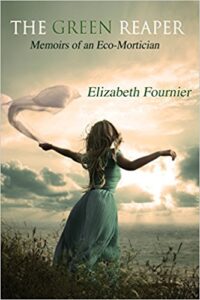 When Elizabeth Fournier was eight, her mother and grandparents died. She spent a lot of time in funeral homes as a kid since her family were frequently found in caskets. Fournier family members didn’t have the best longevity record.

As a young girl, Elizabeth found cemeteries a place of peace and tranquility. As a teen, she’d attend funerals of people she didn’t know. Not surprisingly, she eventually headed into the local funeral home and asked for a job, any job. She landed the position of live-in night keeper, where she resided in a trailer in the far reaches of a large, hilly cemetery. She slept with a shotgun near her bed, experiencing the scariest summer of her life.

In her memoir, Elizabeth Fournier writes about her calling to the funeral industry, and how her early struggles helped shape her life ministry: taking care of the dead and preparing more meaningful burials.

As a one-woman funeral service in the rural town of Boring, Oregon, Mortician Elizabeth Fournier supports old-school burial practices that are kinder to humans and the Earth. She has been called “The Green Reaper” for her passionate advocacy of green burial.

As an undertaker, she is always ready to lend a hand, or a shovel.

When my editor was approached and asked if we would review this book, she immediately knew that it was something I would read. She knows I like off-the-wall books. I love to read quirky non-fiction books and this one seemed right up my alley. Plus the key words in the title: The Green Reaper and Eco-Mortician kind of drew me in from the get go.

Nancy’s mother died of cancer when she was only 8 years old. Her grandparents passed away shortly after that. Raised by her father and her slightly older brother she slowly learned to navigate without a maternal figure. She asked her dad “Why?”. His response was “Just because”. She never really understood that response as a child until she was watching the Sesame Street “Mr. Hooper dies” episode and had to explain to her own daughter. As she grew up she became more and more fascinated with death. She would attend funerals of random people. She would be the person that all the neighborhood kids would go to when their pets died. Nancy decided at a young age that she wanted to become a funeral home director and mortician. When she was grown she legally changed her name to her middle name, Elizabeth. She got a job as the nighttime caretaker of a cemetery. She eventually got a job in a funeral home doing odd jobs: Filling in for drivers, washing the cones, fetching coffee, etc. She knew she wanted more. After touring a mortician school in San Fransisco she decided to enroll. She passed with flying colors. She worked in San Fran for awhile before she moved home to Oregon. She eventually found her husband after a string of horrible men. Together they decided she should take the plunge and start her own funeral home that specializes in eco-burials.

I loved this book. I read more than half of it in one night. I sobbed, I laughed and I learned a fair amount about the funeral business that I never knew before. I enjoyed every single second of it. I will definitely be first in line when she writes another one. Hopefully, it will be a follow-up to this one!

You can pick up a copy of The Green Reaper by Elizabeth Fournier on Amazon or Barnes and Noble. Make sure you add The Green Reaper to your To Reads list on Goodreads and leave feedback for the author when you are finished reading.

Stay-at-home mom to two children and one toddler. I love to read, travel (haven't done it in a while), and cook. Born and raised in Three Rivers, Michigan and currently, reside in Northern Michigan. Can't wait to start sharing my book thoughts/ reviews with you!!
Previous BOOK REVIEW: The Education of a Coroner: Lessons in Investigating Death by John Bateson
Next BOOK REVIEW: Queso! by Lisa Fain