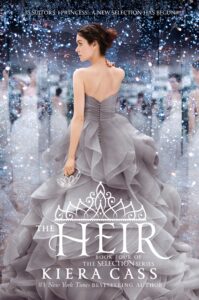 SYNOPSIS: (From Goodreads)
Princess Eadlyn has grown up hearing endless stories about how her mother and father met. Twenty years ago, America Singer entered the Selection and won the heart of Prince Maxon—and they lived happily ever after. Eadlyn has always found their fairy-tale story romantic, but she has no interest in trying to repeat it. If it were up to her, she’d put off marriage for as long as possible.

But a princess’s life is never entirely her own, and Eadlyn can’t escape her very own Selection—no matter how fervently she protests.

Eadlyn doesn’t expect her story to end in romance. But as the competition begins, one entry may just capture Eadlyn’s heart, showing her all the possibilities that lie in front of her . . . and proving that finding her own happily ever after isn’t as impossible as she’s always thought.

REVIEW:
I posted my review of “The One” by Kiera Cass not long ago. That was the third installment in The Selection Series by Cass and what was thought to be the last. Apparently the popularity of this series brought about another extension to this series, “The Heir”.

Skip many years later and the daughter of Prince Maxon and… I won’t say in the event you haven’t read the first three books… is all grown up (if 18 is considered that) and is doing her own selection process. What I loved about this book is that we got to see the selection from the eyes of the selector rather than those vying for the hearts of the selector. We watch this story unfold from Princess Eadlyn’s point-of-view and it’s an interesting one. We see how hard it is to balance personal time, the work of ruling a country, and dating 35 suitors all at the same time. She has the vivacious attitude of her mother (again to remain un-named), and the smarts to rule a country handed down from her father. I loved how closed off Eadlyn is in the story and how you get to see those walls slowly start to crumble as she realizes different things about herself and her role in Illea.

Cass had a fantastic trilogy on her hands and now has extended that story for all of us who loved her writing. The same smooth flowing plot lines are there along with great new characters, development to characters we have already loved for so long and how their stories have turned out, and new twists at every turn. I loved The Selection Series and now I get to love it for longer. A highly recommended read for anyone wanting to truly become absorbed in a story. You will find yourself cheering on different characters depending on your favorites and getting angry at those who stand in their way.

Amazing job Cass for yet another fantastic read. Five stars!

If you have not read Kiera Cass’ Selection Series, make sure to pick them up. They are all available on Amazon and Barnes & Noble. You can also find them in your local book retailer. Along with the first three and this newly released fourth part in the series, there are multiple novellas about different characters such as “The Queen”, “The Prince”, and “The Favorite” to name some. Pick up “The Heir” now and let us know what you think. Check out Kiera Cass online at her site KieraCass.com. She just recently announced that Warner Bros. has won the rights to The Selection series and we hope to see films in our near future!

Super Mom and Awesomely Nerdy Lady who can’t stand to sit still. I ran a successful online radio show that brought fans up close and personal with their favorite music, television and movie stars. Now, with my hilariously nerdy partners in crime, I have turned to my first love, BOOKS! A lover of books from a young age, I now always have a book on me no matter where I go. Books are my therapy. Twitter: @Kristin_Downer
Previous Book Review: Trauma by Michael Palmer and Daniel Palmer
Next BOOK REVIEW: “An Ember in the Ashes” by Sabaa Tahir