BOOK REVIEW: The Kingdom of Oceana by Mitchell Charles 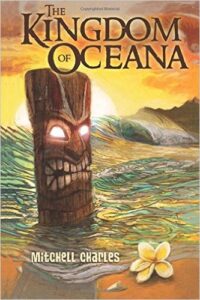 SURFER. SHARK TAMER. FIRE WALKER. EXPLORER. TEENAGER. HERO
Five Centuries Ago,On the Island Now Called Hawaii,There was a Kingdom Filled with Adventure, Beauty, and Magic.
When 16-year-old Prince Ailani and his brother Nahoa trespass on a forbidden burial ground and uncover an ancient tiki mask, they unleash a thousand-year-old curse that threatens to destroy their tropical paradise.
As warring factions collide for control of Oceana, it sparks an age-old conflict between rival sorcerers that threatens to erupt–just like Mauna Kea, the towering volcano.With the help of his ancestral spirit animals, his shape shifting sidekick, and a beautiful princess, Prince Ailani must overcome his own insecurities, a lifetime of sibling rivalry, and a plague of cursed sea creatures brought forth by the tiki’s spell.
Can peace be restored to the kingdom? Can Prince Ailani claim his rightful place as the future king of Oceana?
TWO BROTHERS, BUT ONLY ONE CAN RULE.

When you first pick up a book the cover is the thing that catches your attention. The Kingdom of Oceana has a colorful, bright, and catching cover that instantly drew me in. Mitchel Charles, author, also has a great writing style that flows smoothly to keep me interested as the story progressed.

The story follows Prince Ailani and his brother as they go through many moments of growth and spiritual exercises to find their spirit animals, escape a fate for their entire community and find out what love feels like. So many things go on in The Kingdom of Oceana, but it doesn’t come off as overwhelming. I loved how the two brothers both have very different personalities and it stands true to real life where sometimes you have to learn to work with people very unlike yourself for the greater good. I feel the one downfall of this book was the reading. Because it is a Hawaiian based speech there were many words I was unfamiliar with. The author did offer a glossary of words with meanings, but a lot of them I was unaware of how to even read them. This would be even more difficult for some of the kids that may read this book. Other than the few words spread throughout the book that are harder to read, this book was a joy to read. It had a intriguing and wholesome message woven throughout the story and an ending that left most happy, although there were a few that didn’t get such a great finale.

I would recommend The Kingdom of Oceana to anyone wanting an easy ready with a meaningful message and likable, relatable characters. This book is not just for kids. Parents and youth alike would all enjoy this book. A solid 4 out of 5 stars for Mitchell Charles’ The Kingdom of Oceana.

You can get your copy of The Kingdom of Oceana by Mitchell Charles on Amazon. Make sure to add it to your Goodreads To Reads list and leave your feedback for the author when you are finished.

Super Mom and Awesomely Nerdy Lady who can’t stand to sit still. I ran a successful online radio show that brought fans up close and personal with their favorite music, television and movie stars. Now, with my hilariously nerdy partners in crime, I have turned to my first love, BOOKS! A lover of books from a young age, I now always have a book on me no matter where I go. Books are my therapy. Twitter: @Kristin_Downer
Previous BOOK REVIEW: Not Tonight, Josephine: A Road Trip Through Small-Town America by George Mahood
Next BOOK REVIEW: Hunted (Cycle 13) by Jill Kaelin