BOOK REVIEW: “The Life and Loves of a He Devil: A Memoir

Title: The Life and Loves of a He Devil: A Memoir
Author: Graham Norton
Publication: April 1, 2015
Publisher: Hodder and Stoughton
Genre: Biographies and Memoirs
Pages: 309 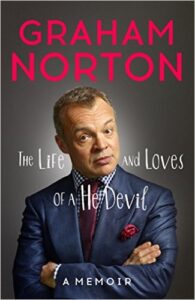 Revealing, moving, and hilarious, Graham Norton tells the story of his life through the things he loves in a brand new memoir

Graham Norton has been entertaining audiences and having fun with some of the world’s biggest stars for nearly 20 years. He is loved for his delight in the peculiar and for his ability to find humor and a common ground in all that life brings. Here is Graham’s funny and honest memoir on the theme of love. As he shows, it’s really the things you love that make you who you are and so Graham tells his story from his Irish childhood to the present day, describing just what and who he loved—and sometimes lost—as a young boy, and his new loves and obsessions—big and small—as he’s grown older. It’s been 10 years since his last book and being a decade older Graham has come to realize that what makes a life interesting is less what happens to you and more what inspires and drives you, what you love. From Dolly Parton and dogs to wine and Ireland, Graham tells of his life and loves with characteristic humor and outrageous candor.

If you have watched BBC America then you may have seen The Graham Norton Show. He is a flamboyant gay Irish comedian with a talk show. While he probably isn’t safe for young ears, he is one of the comedians that I really enjoy. His show led me to look him up on YouTube and then looking to see if he had written a book. Lo and behold, he did.

The story really doesn’t start or end anywhere. He just picks and chooses different parts of his past to tell the reader. He talks about growing up Protestant in Roman Catholic Ireland. How he couldn’t wait to leave. Later, as an adult, he cannot wait to leave London and go back to Ireland. He talks about all of his various shows. From the ones that have failed to the ones that have taken off. Including his current chat show on BBC America. He tells about his attempts at making a show in the USA on several stations, including Comedy Central. He touches on a few of his failed relationships. Some resulted in lasting friendships. One even resulted in him owning his first dog. A dog he still has to this day. He shares how he didn’t think he was gay and how he dated a woman while he lived in San Francisco. Trying a long distance relationship that didn’t work out at all. He discusses his sexuality. Originally thinking he was bisexual, his coming out was so gradual that everyone around him knew that he was gay before he did.

The book was hilarious. At several points, I had tears streaming down my face from laughing so hard. I would read parts of it to my husband because they were too funny to not share. Yes he does use some vulgar language, but it’s not like a child will be reading the story nor is it inappropriate in context. I thoroughly enjoyed this book. The way it is written, I can hear him telling me all of the stories. I will be reading his other books soon.

Pick up your copy of “The Life and Loves of a He Devil: A Memoir on Amazon and Barnes and Nobles or at a bookstore near you. You can also add it to your TO READS list on Goodreads and leave feedback for the author. Check out Graham Norton on BBC America (here in the states) or of course for our friends across the pond on their local stations as well. His show is fantastic! You can follow him on twitter @GrahNort as well!

Stay-at-home mom to two children and one toddler. I love to read, travel (haven't done it in a while), and cook. Born and raised in Three Rivers, Michigan and currently, reside in Northern Michigan. Can't wait to start sharing my book thoughts/ reviews with you!!
Previous BOOK REVIEW: “Try Not To Breathe” by Holly Seddon
Next BOOK REVIEW: “13 Ways of Looking at a Fat Girl” by Mona Awad