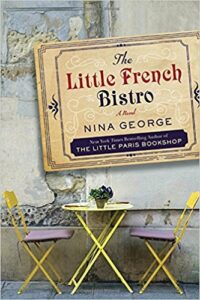 Marianne is stuck in a loveless, unhappy marriage. After forty-one years, she has reached her limit, and one evening in Paris she decides to take action. Following a dramatic moment on the banks of the Seine, Marianne leaves her life behind and sets out for the coast of Brittany, also known as the end of the world.

Here she meets a cast of colorful and unforgettable locals who surprise her with their warm welcome, and the natural ease they all seem to have, taking pleasure in life s small moments. And, as the parts of herself she had long forgotten return to her in this new world, Marianne learns it s never too late to begin the search for what life should have been all along.

With all the buoyant charm that made The Little Paris Bookshop a beloved bestseller, The Little French Bistro is a tale of second chances and a delightful embrace of the joys of life in France.

First the name, The Little French Bistro, then the cover, a simple bistro style table and chairs, drew me into this book. I thought that it would be a light and easy read filled with food and stereotypical French life. What I found inside couldn’t be further from that. I was both a little disappointed and pleasantly surprised.

The story opens as the main character, Marianne, is leaving alone from a party in Paris. Escaping the clutches of her controlling and emotionally abusive husband, Lothar, whom she has been with for 41 years. She decides that she is going to end it all. It’s the only way she can see her way out of this relationship. She finds a bench on the banks of the Seine and starts to undress. Carefully folding and stacking all of her clothes so that someone in more need of them than her will find them. What use of them they will get she doesn’t know. The dress is bland and old as is the coat. Lothar never allowed her to get new clothes. She climbs up onto the brick wall and jumps in. Letting the river pull her under. Gulping in huge lung fulls of dirty Seine water. She is at peace. The most peaceful she has been in a long time. Suddenly, she is rescued by a homeless man who watched her jump in. His friends call an ambulance and they take her to the local mental hospital. Lothar tells her that he is going to have her returned to Germany, where they live. She escapes from the mental hospital and makes her way to the town of Kerduc, France. A town she found on a painted tile on her travels. She had once again planned to kill herself in the sea. Each day she tried and each day she said maybe the next. She found love again. She found dear friends. She found a job that she loved and was good at.

I still have no idea what to think about this book. On one hand, it was pretty good. The author did an amazing job of giving the characters back stories. The places she described came to life in my mind’s eye. The problem was that even on the happiest and lightest part of the story it still had a fairly dark and turbulent undercurrent. The author does tackle suicide and depression. I enjoyed the character of Marianne but she was so wishy washy. She ran away from any problems she had. She was excellent in solving other people’s issues but when it came to her own she stuck her head in the sand. The book covers dark things. Death from cancer, Dementia/Alzheimer’s, affairs, Parkinson’s, abusive significant other and suicide. The book then suddenly takes an odd turn at the end and it ends up her being a Druid, or what I assume is a Druid, and playing the accordion on the beach. I do have the other book Nina George wrote, The Little Paris Bookshop. After reading this book, I hope that it is a more happy read than The Little French Bistro.

Your copy of The Little French Bistro by Nina George from Amazon or Barnes and Noble. Make sure to add it to your To Reads list on Goodreads. Also check out more books from Nina George, including her popular book The Little Paris Bookshop, at her website here.

Stay-at-home mom to two children and one toddler. I love to read, travel (haven't done it in a while), and cook. Born and raised in Three Rivers, Michigan and currently, reside in Northern Michigan. Can't wait to start sharing my book thoughts/ reviews with you!!
Previous BOOK REVIEW: Toward a Secret Sky by Heather Maclean
Next BOOK REVIEW: The Breakdown by B. A. Paris