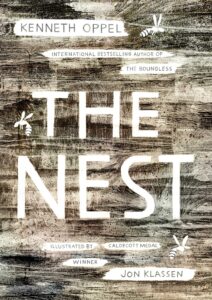 Synopsis: (From Goodreads)
Steve just wants to save his baby brother—but what will he lose in the bargain? This is a haunting gothic tale for fans of Coraline, from acclaimed author Kenneth Oppel (Silverwing, The Boundless) with illustrations from Caldecott Medalist Jon Klassen.

For some kids summer is a sun-soaked season of fun. But for Steve, it’s just another season of worries. Worries about his sick newborn baby brother who is fighting to survive, worries about his parents who are struggling to cope, even worries about the wasp’s nest looming ominously from the eaves. So when a mysterious wasp queen invades his dreams, offering to “fix” the baby, Steve thinks his prayers have been answered.

All he has to do is say “Yes.” But “yes” is a powerful word. It is also a dangerous one. And once it is uttered, can it be taken back?

Celebrated author Kenneth Oppel creates an eerie masterpiece in this compelling story that explores disability and diversity, fears and dreams, and what ultimately makes a family. Includes illustrations from celebrated artist Jon Klassen.

I want to start by saying I had absolutely no idea what I was getting into when picking up “The Nest”. I had read the synopsis and thought it sounded interesting. However, the synopsis I read was initially much smaller than the one now. So I was a bit surprised as I started to read and find out what it was about. But Kenneth Oppel is a bestselling author and a really good writer in general… so I was excited to read his newest book.

“The Nest” follows the story of Steve, a young boy with a OCD, nightmares, and a fear of wasps. Steve starts having dreams about talking with someone he thinks is angels, but is something far more… nefarious. As a reader I got to follow along as Steve fought his gut instinct on what was right and wrong. I loved the way we got to witness that inner struggle of a young child who is trying to get a grasp of how life works, what is done to handle tough scenarios, and the hard lesson that everything is not sunshine and rainbows. Oppel takes us on a terrifying journey that feeds on a child’s fears, questionable characters, and overworked and tired parents trying to juggle a lot of things at once. I was convinced it was all a bad dream the entire time. Oppel definitely got me!

While this story is way outside my normal reading, I have to say I was very intrigued as I started moving through the story. There is so much going on for Steve that at first it was very difficult to wrap my head around the reality of this story, which is far from reality. I guess I wasn’t expecting as much science fiction as I got. “The Nest” is probably one of the strangest books I’ve ever read, but surprisingly one of the most intriguing. As many times as I stopped and though “What is happening here…” I couldn’t put it down. I had to know what happened in the end. And most importantly, his writing flowed so smoothly that any hesitancy I had towards the plot was washed away by excellent writing. In my opinion, that manes Oppel did his job as a writer. He hooked me 100% and kept me trailing along the entire time. If you are in the mood for something a little different than your average read, pick up this book. It’s not normal… far from it. But it will keep you interested and guessing the entire time.

Pick up your copy of “The Nest” by Kenneth Oppel when it launches October 6th. It’s available on Amazon and Barnes and Noble. You can also pick it up at your local bookstore. Add it to your TO READ list on Goodreads and check out the author at his website here! And a huge round of applause to the illustrator in this book, Jon Klassen, who did a fabulous job putting a visual spin on this story!

Super Mom and Awesomely Nerdy Lady who can’t stand to sit still. I ran a successful online radio show that brought fans up close and personal with their favorite music, television and movie stars. Now, with my hilariously nerdy partners in crime, I have turned to my first love, BOOKS! A lover of books from a young age, I now always have a book on me no matter where I go. Books are my therapy. Twitter: @Kristin_Downer
Previous BOOK REVIEW: “About Anna” by Sophia Michelle Delanner
Next BOOK REVIEW/BLOG TOUR: “The Poet’s Secret” by Kenneth Zak