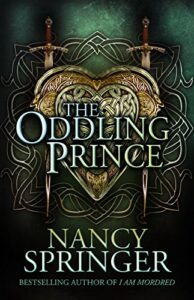 In the ancient moors of Scotland, the king of Calidon lies on his deathbed, cursed by a ring that cannot be removed from his finger. When a mysterious fey stranger appears to save the king, he also carries a secret that could tear the royal family apart.

The kingdom’s only hope will lie with two young men raised worlds apart. Aric is the beloved heir to the throne of Calidon; Albaric is clearly of noble origin yet strangely out of place.

The Oddling Prince is a tale of brothers whose love and loyalty to each other is such that it defies impending warfare, sundering seas, fated hatred, and the very course of time itself. In her long-awaited new fantasy novel, Nancy Springer (the Books of Isle series) explores the darkness of the human heart as well as its unceasing capacity for love.

The Oddling Prince struck an odd chord, and I wish I could have finished the entire book. It’s a story about family, two brothers to be exact, and their journey to become family. The setting is the ancient moors of Scotland where the current king is dying of a mysterious illness. The beginning of this book was interesting and it kept me excited for the first few chapters, but unfortunately I just couldn’t read past chapter eleven. For me the details are so important and the characters did not feel Scottish to me. The setting didn’t feel Scottish either. This made it hard to concentrate on the actual story itself, which is disappointing, because the writing is very well done and the story has so much potential. If the accents were correct and the setting detailed with more depth, those details would have added to the story, therefore, been less distracting. I’ve never read anything by Nancy Springer previously but I look forward to reading more of her work in the future, just a different series.

The Oddling Prince by Nancy Springer will be available on May 15, 2018 on Amazon and Barnes and Noble. Also add it to your To Reads list on Goodreads and leave feedback from the author when you are finished.

A lifetime member of the nerd club, Nikki is a mom, an avid reader, and well versed in computers. She is a Supernatural ‘Lifer’, having watched since day one. When she’s not reading or writing, she’s at a Supernatural fan convention or Disney World.
Previous BOOK REVIEW: Children of Daedala by Caighlan Smith
Next BOOK REVIEW: The Fandom by Anna Day