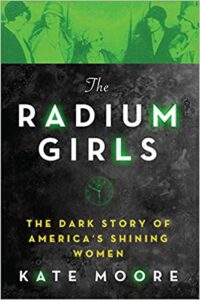 The Curies’ newly discovered element of radium makes gleaming headlines across the nation as the fresh face of beauty, and wonder drug of the medical community. From body lotion to tonic water, the popular new element shines bright in the otherwise dark years of the First World War.

Meanwhile, hundreds of girls toil amidst the glowing dust of the radium-dial factories. The glittering chemical covers their bodies from head to toe; they light up the night like industrious fireflies. With such a coveted job, these “shining girls” are the luckiest alive — until they begin to fall mysteriously ill.

But the factories that once offered golden opportunities are now ignoring all claims of the gruesome side effects, and the women’s cries of corruption. And as the fatal poison of the radium takes hold, the brave shining girls find themselves embroiled in one of the biggest scandals of America’s early 20th century, and in a groundbreaking battle for workers’ rights that will echo for centuries to come.

Written with a sparkling voice and breakneck pace, The Radium Girls fully illuminates the inspiring young women exposed to the “wonder” substance of radium, and their awe-inspiring strength in the face of almost impossible circumstances. Their courage and tenacity led to life-changing regulations, research into nuclear bombing, and ultimately saved hundreds of thousands of lives…

I saw this book while browsing NetGalley for something to read. I had always skipped over it because it had already been published and I was trying to do good with my turn in dates. However, while watching PBS one night, I managed to catch the last 15-20 minutes of the program talking about The Radium Girls. I was fascinated. I immediately went and requested the book. I had to find out more about Radium and the destruction it did to these young women who worked with it.

First off, let’s start with the fact that Radium has a HALF LIFE of 1,600 years! Let that sink in. When most of us are gone, any Radium used in WW 1 and WW 2 will still be radioactive and wreaking havoc on anything it touches. When Radium was first created it was used in basically everything. It was used to “cure” cancer as it would eat the cancer cells but then eat the healthy cells as well. They made Radium make-up, lingerie, jockstraps, butter, milk, and toothpaste. During WW 1, it was the IT job to have. Girls made crazy amounts of money that let them dress in furs, the latest styles and have custom ordered dressed made for them. Everyone wanted to be a dial painter. Each girl was given a dish of powdered Radium and a white dish of gum arabic. They would take their brush, twirl it on their lip, dip it in the Radium mixture and then paint. They would repeat this over and over. Ingesting Radium as they went. The mixing of those compounds created a paste and made the Radium glow allowing them to paint clock faces for the soldiers. The girls would glow as they walked home. Their hair, face, clothes, everything. They were never told that it was a dangerous substance. Slowly they began to start having their teeth pulled. They started to limp and have stillborn/ miscarried children. Eventually, their jaws and skulls would abscess away. Some unlucky girls started to grow tumors in their shoulders, arms, legs, hips, uterus, and back. Some growing so fast that they would shatter the bones and break through the skin. Both they and their families started to take a stand suing the Radium companies for pain, suffering, medical bills, lost wages and eventually funeral costs. They went to court over and over. Each time the evidence was that the Radium was perfectly safe and caused no health issues. The Radium companies were doctoring the results so that no one saw what the reports really said. Will the Radium companies continue to win and brush the results under the rug? Will the multitudes of women eventually help change OSHA standards to what they are today?

This book was fascinating, sad, brave, and so hopeful all at the same time. The way the women’s bodies fell apart before their eyes was absolutely heartbreaking. The women who carried children within them just to deliver a dead child is heartbreaking. It made me hug my own children close. The ones that did manage to carry full term and deliver had a child that was always small and always behind on the growth scale. The way the women carried on knowing they were going to die but wanting to see it through til the end is so hopeful. They wanted retribution for what had happened and would happen to their friends and family. They never gave up hope. Finally, in 2011, a memorial to The Radium Girls in Illinois was erected after an 8th grader learned about what had happened. She slowly raised the funds and a bronze statue was erected in their honor. The only reason I gave it 4 stars is because it seemed to drag on for forever. I could read it for an hour and still be no farther ahead than what I was when I started. Don’t get me wrong, the book was amazing it was just a long read.

Pick up your copy of The Radium Girls by Kate Moore on Amazon or Barnes and Noble. You can also find a copy at your local bookstore. Check out Kate Moore’s website featuring other genres of novels she has written here!

Stay-at-home mom to two children and one toddler. I love to read, travel (haven't done it in a while), and cook. Born and raised in Three Rivers, Michigan and currently, reside in Northern Michigan. Can't wait to start sharing my book thoughts/ reviews with you!!
Previous BOOK REVIEW: Bad Girl Gone by Temple Mathews
Next BOOK REVIEW: One Summer Day In Rome by Mark Lamprell