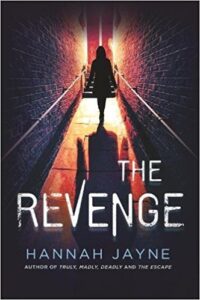 After Hope breaks up with Tony and embarrasses him at school, he’s devastated. In a moment of revenge, Tony makes the location on her phone public. But a week later, when Hope calls Tony and begs him to stop the prank, he hears a shriek and a car door slamming. Then the call is dropped.

When Hope isn’t back at school the next day, Tony realizes that he may have put Hope’s life in danger. Can he trace Hope’s movements and save her before it’s too late?

I have read a few books by Hannah Jayne before and am finding her books are usually entertaining, an easy read, and an intriguing plot line. The Revenge followed the same line. The story follows Tony as he deals with the repercussions of a breakup with one of the most popular and semi-famous girls in school. A civil break up turns into a huge ordeal when Hope goes missing after an angry Tony shares her personal location on the internet. Being a face in entertainment, it would seem stalkers came out of the woodwork.

I was torn between who I was cheering for in this story and who I was upset at most. Jayne has a way of writing characters where you feel really passionate about them. I felt really passionate about my dislike for Hope. She was your average spoiled rotten, privileged girl. She felt she deserved everything she wanted, and heaven forbid anyone who didn’t align with her idea of what that was. When she didn’t get her way she acted out and we saw the repercussions of this play out through the entire book. Tony was the boy next door who got hung up with the wrong people and ended up taking hits for it.

The writing was clear and concise and the timeline flowed smoothly throughout the entire book. The Revenge was almost like two stories woven into one. You had the upfront story of what is happening with Tony and the investigation into a missing Hope. Then you have Hope’s story playing in the background. While it jumped back and forth, it wasn’t chopping and the swapping happened at times when you kind of needed to know what was happening on the other side. Jayne through in a huge twist about halfway through, which upped the suspense and mystery of the whole situation.

My biggest upset and possibly only upset about The Revenge was the ending. I felt like there was no closure. It came to a very abrupt end after a high intensity moment. The story never really ended, it just kind of left you hanging with what you think would have happened next. I was not a fan of that. I like the end of mysteries because its ties up all those little lose ends and solves the mystery, whether it be a happy or sad ending. This story didn’t do that for me. Had the ending been different, I would have been able to rate this a little higher. A good book though and I’ll continue picking up Hannah Jayne’s books in the future.

You can pick up your copy of The Revenge on Amazon or Barnes and Noble or at a bookstore near you. Make sure you add it to your To Reads list on Goodreads. Also check out more from Hannah Jayne. We reviewed her previous book The Dare HERE and Twisted HERE. You can also follow author Hannah Jayne on Twitter!

Stay-at-home mom to two children and one toddler. I love to read, travel (haven't done it in a while), and cook. Born and raised in Three Rivers, Michigan and currently, reside in Northern Michigan. Can't wait to start sharing my book thoughts/ reviews with you!!
Previous BOOK REVIEW: One Summer Day In Rome by Mark Lamprell
Next A Weekend In Covington