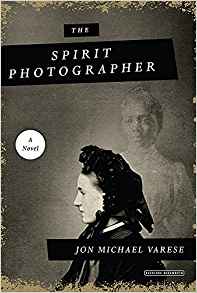 For fans of Cold Mountain and The Alienist, the stunning debut novel of historical suspense about a charismatic conman haunted—perhaps literally—by a ghost from his past

Boston, 1870. Photographer Edward Moody runs a booming business capturing the images of the spirits of the departed in his portraits. He lures grieving widows and mourning mothers into his studio with promises of catching the ghosts of their deceased loved ones with his camera. Despite the whispers around town that Moody is a fraud of the basest kind, no one has been able to expose him, and word of his gift has spread, earning him money, fame, and a growing list of illustrious clients.

One day, while developing the negative from a sitting to capture the spirit of the young son of an abolitionist senator, Moody is shocked to see a different spectral figure develop before his eyes. Instead of the staged image of the boy he was expecting, the camera has seemingly captured the spirit of a beautiful young woman. Is it possible that the spirit photographer caught a real ghost? When Moody recognizes the woman in the photograph as the daughter of an escaped slave he knew long ago, he is compelled to travel from Boston to the Louisiana bayous to resolve their unfinished business—and perhaps save his soul. But more than one person is out to stop him . . .

With dramatic twists and redolent of the mood of the Southern Gothic, The Spirit Photographer conjures the Reconstruction era South, replete with fugitive hunters, voodoo healers, and other dangers lurking in the swamp. Jon Michael Varese’s deftly plotted first novel is an intense tale of death and betrayal that will thrill readers as they unravel the dreadful mystery behind the spirit in the photograph and what ultimately became of her.

I am my families resident genealogist. When I saw the book about “spirit photography” it totally piqued my interest. Spirit Photography? I have got to read this book and find out what it is all about. While it wasn’t exactly what I was expecting it was still an amazing book. With it being loosely based on true events it makes it even better since it’s no secret that I enjoy books based on true events.

The story weaves around Elizabeth Garrett and her husband James. They are a prominent family in Boston. James is a Senator and a staunch supporter of the freeing of slaves. The rest of the story revolves around Edward Moody and Joseph Winter. Edward is a “Spirit Photographer”. He is both lauded for reuniting loved ones with their deceased family members and frowned upon for taking advantage of people. Some think he is a trickster or uses slight of hand. The Garrett’s and Moody’s paths cross when Elizabeth books a sitting so that they can hopefully get the spirit of their deceased 3-year-old son William Jeffery Garrett’s on a photo with them. That way they can be reunited once more. Elizabeth is very excited for the sitting. She has taken the death of her son hard. James, on the other hand, is very skeptical and slightly digs his heels in when his wife suggests the photo. In the end, he gives in and goes with her. While they received their spirit photo, it is not the spirit they were expecting or planning on ever seeing again. The spirit that appeared was Isabelle, the nanny of their son, who vanished after he died. Elizabeth angerly storms out while James is visibly shaken. Will Elizabeth and James be able to weather this storm together or will it tear them apart? Will Joseph be able to save Moody from himself and from the fire and pitchforks that are after him?

If you only buy/read/borrow one book this year it has got to be this one! Once I actually sat down to read this book, I just flew through it. If you are a post Civil War/Reformation history buff this book is for you. The characters were well rounded. You could sympathize with Elizabeth for the loss of her child but at the same time be slightly appalled by her for her actions as the book progressed. With James, I must say that I really never sympathize with him. I was more appalled by his actions than anyone else in the book. The way Elizabeth would cover up any of his transgression so that it did not tarnish his reputation as a Senator disgusted me. Moody and Winter I envisioned as a Sherlock Holmes and Watson duo. Moody is the slightly clueless counterpart to Winter’s street smarts and knowing how things work in the world. This book kept me guessing as to what was going to happen on the next page. It gave me a historical mystery that I would happily buy as a gift for the history buff in my family. I will definitely keep an eye out for more books by this author.

You can pick up your own copy of The Spirit Photographer on Amazon or Barnes and Noble. Also make sure to add it to your To Reads list on Goodreads.

Stay-at-home mom to two children and one toddler. I love to read, travel (haven't done it in a while), and cook. Born and raised in Three Rivers, Michigan and currently, reside in Northern Michigan. Can't wait to start sharing my book thoughts/ reviews with you!!
Previous BOOK REVIEW: The Family Next Door by Sally Hepworth
Next BOOK REVIEW: The Broken Girls by Simone St. James