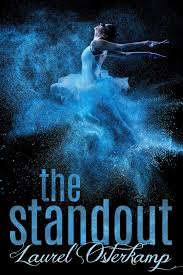 SYNOPSIS:
First Robin gets the email with its simple demand: dump your fiancé or else. Then someone puts up the slanderous Rotten Robin Website that threatens to crush her chances to win The Standout, a ballet-themed, fashion reality show. Surrounded by backstabbing co-contestants and haunted by mysterious ghosts from her past, Robin can’t trust anyone, including herself. Her only allies are Zelda, a ballerina and model, and her older brother Ted, both of whom have ghosts and secrets of their own.

The Standout is a psychological thriller about love and betrayal, life and death, tall buildings, and finding the courage to jump.

With a title like The Standout, I was expecting it to, I don’t know, stand out from the rest. Rise above other books I have recently read. I wanted it to “wow” me. While the book did stand out in some respects, in others, it fell flat.

One thing that Laurel Osterkamp did a nice job with was creating certain characters I wanted to root for. Like Robin and Zelda. I was hooked on their story lines immediately.
On the brink of a new engagement to fiancé Nick, Robin finds herself participating in her second reality TV show where she has the opportunity to display her talents as a fashion designer. Though she feels haunted by memories from her past, she does her best to shine in the competition. All the while, Robin also has a slandering stalker. After various attempts from Robin’s brother and fiancé, Robin cannot figure out who is behind the character disgracing website, the threatening letters, or the inappropriate messages and videos.

In the midst of all this, Robin forges an instant friendship with her model, and ballet dancer, Zelda, who is the one to showcase Robin’s newest fashion creations. Zelda is trying to discover who she is. Does she want to follow the path her mom and supposed best friend, Julie, have pushed her towards? Or does she want to live her own life and make her own choices? I found myself able to easily identify with Zelda’s character. She aimed to please, but also to follow her own inclinations, and this became something she strived to figure out throughout the novel.
Furthermore, Robin and Zelda find ways to support one another through their various trials. Zelda plays a crucial part in discovering who Robin’s stalker is, and Robin inspires Zelda to believe in herself again. This book has all the elements that mimic the reality TV show it portrays. Suspense, drama, and interweaving story lines make Osterkamp’s latest an appealing read.
The two things I did not care for in this novel were its grammatical inaccuracies and its predictability. If a book makes it to publishing, I should not be able to find glaringly obvious errors that should have been caught during a first-run proofreading stint. The author uses the term “gas petal”, not “gas pedal” and a line of dialogue that reads, “Yuri, watch I out!” instead of “Yuri, watch out!” Are these trivial? Perhaps. But as a reader, I don’t believe I should have to edit the book as I go.

Also, I found myself able to easily predict some of the climactic events in the story, and when they actually happened, I was not surprised, but expectant. The predictability makes this book, what I would call “a good summer beach read.” If you want a book where the pages turn effortlessly, but it’s not entirely thought provoking, then pick up a copy of this book. It won’t leave you disappointed, but it might leave you desiring something more than what you get.

Pick up your copy of “The Standout” now on Amazon and add it to your TO READS shelf on Goodreads! Laurel Osterkamp has multiple other books, so check them out on her website HERE and get yourself a copy.

BIO: Born and raised in Michigan, Amy is a proud wife, mother, and Christian. She currently teaches 8th grade Language Arts, where she can show her nerdy tendencies in her love for punctuation, book discussions, descriptive words, and parallel structure. She also enjoys reading, shopping, spending time with her family, and eating really delicious food.
Previous BOOK REVIEW: “Hardwired” by Trisha Leaver and Lindsay Currie
Next BOOK REVIEW: “In the Dark” by Chris Patchell