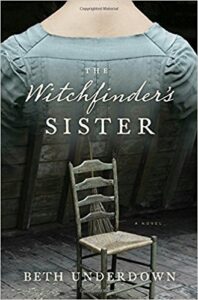 Essex, England, 1645. With a heavy heart, Alice Hopkins returns to the small town she grew up in. Widowed, with child, and without prospects, she is forced to find refuge at the house of her younger brother, Matthew. In the five years she has been gone, the boy she knew has become a man of influence and wealth–but more has changed than merely his fortunes. Alice fears that even as the cruel burns of a childhood accident still mark his face, something terrible has scarred Matthew’s soul.

There is a new darkness in the town, too–frightened whispers are stirring in the streets, and Alice’s blood runs cold with dread when she discovers that Matthew is a ruthless hunter of suspected witches. Torn between devotion to her brother and horror at what he’s become, Alice is desperate to intervene–and deathly afraid of the consequences. But as Matthew’s reign of terror spreads, Alice must choose between her safety and her soul.

Alone and surrounded by suspicious eyes, Alice seeks out the fuel firing her brother’s brutal mission–and is drawn into the Hopkins family’s past. There she finds secrets nested within secrets: and at their heart, the poisonous truth. Only by putting her own life and liberty in peril can she defeat this darkest of evils–before more innocent women are forced to the gallows.
Inspired by the real-life story of notorious “Witchfinder General” Matthew Hopkins, Beth Underdown’s thrilling debut novel blends spellbinding history with harrowing storytelling for a truly haunting reading experience.

The cover of this book is what drew me in at first. It shows what one can only assume is an empty room with just a plain highback chair and the back of a woman. The story is described as a historical thriller and I see some people shelved it as a paranormal/witches kind of story. If you do not like that sort of book do not let that dissuade you from reading this one. I DO NOT like anything that is in any way, shape or form scary. I avoid it like the plague. This book is anything but scary. It may be a little breath catching in a couple of places but other than that it’s fairly mundane.

The story begins in roughly 1645, in England, as Alice Hopkins is working her way back towards her childhood home of Manningtree. Her husband is dead and so is her mother. She is carrying her 5th child and hopes to carry it to term. Her 4 other pregnancies ended in miscarriage or stillbirth. As she bumps and thumps over the muddy road in the back of the wagon she wonders how her life will work out. How her brother Matthew has turned out. He was always a quiet boy, with scars down his face, chest, and arm from an accident when he was just days old. While she was never put off by the scars she knows some people are. She also hopes that her brother has forgiven her for marrying the person that she did. She seems to be welcomed back home by her brother and is tasked with returning their childhood home to its former glory for his upcoming nuptials with Ruth Edwards. While Alice lives under her brother’s roof she slowly realizes that her brother is not who she thinks he is. He is slowly and methodically capturing, torturing and killing “witches” across the British county-side. All with permission of those in a position of authority and deep pockets. Will she be able to stop her brother before it’s too late? Or will Alice be put firmly in the cross-hairs of her brother’s methodical take down as well?

I debated about giving this book 2 or 3 stars. In the end, I ended up with 3. I finished this book a few days ago and I am still not sure how I feel about it. The big thing that bothered me about this book was that it never really developed. It was more a this happened, then he went and did this. The other supporting characters seemed very one-dimensional. The ending also just kind of happened and bam the book was done. It left a lot of loose ends. I don’t know if that is what the author was going for but the character of Matthew was creepy and somewhat mental. That said, I really enjoyed the main character, Alice. She was gutsy. She seemed to have a good moral compass. She spoke her mind when she actually worked up the courage. She was, in most ways, a good, strong female character that is sometimes lacking in books. I felt sorry for Alice at times. It felt that nothing seemed to go her way. The loss of all her children, her husband’s untimely and tragic end as well as the death of all three of her parents. I did find it fascinating that the character of Matthew Hopkins is based on an actual historical character. While a large part of the story is fictional some of the events are true and are actually recorded in history books. While I am still on the fence with this story I would probably try to read other books that this author writes in the future.

The Witchfinder’s Sister by Beth Underdown released April 25, 2017 and can be picked up on Amazon, Barnes and Noble, or your local bookstore. Make sure you add it to your To Reads list on Goodreads and leave your feedback for the author when you are finished. You can find out more about author Beth Underdown on her website HERE and follow her on Twitter!

Stay-at-home mom to two children and one toddler. I love to read, travel (haven't done it in a while), and cook. Born and raised in Three Rivers, Michigan and currently, reside in Northern Michigan. Can't wait to start sharing my book thoughts/ reviews with you!!
Previous EXCLUSIVE INTERVIEW: Gwenda Bond Discusses New YA Novel Lois Lane: Triple Threat
Next FANFICTION REVIEW: Auto In by goldnox