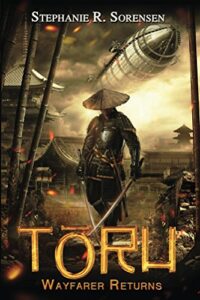 In Japan of 1852, the peace imposed by the Tokugawa Shoguns has lasted 250 years. Peace has turned to stagnation, however, as the commoners grow impoverished and their lords restless. Swords rust. Martial values decay. Foreign barbarians circle the island nation’s closed borders like vultures, growing ever more demanding.

Toru, a shipwrecked young fisherman rescued by American traders and taken to America, defies the Shogun’s ban on returning to Japan, determined to save his homeland from foreign invasion. Can he rouse his countrymen in time? Or will the cruel Shogun carry out his vow to execute all who set foot in Japan after traveling abroad? Armed only with his will, a few books, dirigible plans and dangerous ideas, Toru must transform the Emperor’s realm before the Black Ships come.

Toru: Wayfarer Returns is the first book in the Sakura Steam Series, an alternate history of the tumultuous period from the opening of Japan in 1853 to the Meiji Restoration in 1868. This volume covers the year prior to the American Commodore Perry’s arrival in Japan and follows the hero and his young allies as they lead Japan through a massively compressed industrial revolution, dramatically altering that pivotal moment in history.

While Toru and his dirigibles are fictional, the story unfolds against the backdrop of the ‘real’ Japan of that period, with historical figures and their political environment woven into the tale, staying true to their motivations and agendas even as the alternate history warps their actions, history and a few laws of physics. Underpinning the adventure plot is a young man’s yearning for his father’s approval and an honorable place in his world.

Readers who enjoy steampunk alternate histories more typically set in Victorian England or the American Wild West may enjoy this steampunk story made fresh by the Japanese samurai setting, as well as readers who enjoy historical fiction set in Japan.

Confession: I cannot wrap my head around Steampunk. I understand that it is blending of old and new. Generally with the Victorian Era. At least that is what I understood from the Wikipedia article I read. That is where my understanding of it ends. However, when I read the description of this book, a sci-fi/fantasy/steampunk novel, I had to read it. While not a Steampunk aficionado, I do like sci-fi/fantasy.

This book takes place in Japan in 1852-1853. The story opens with Toru, the main character, being dropped ashore in his homeland by the Americans that he had spent the last two to three years with. He returned to care for his mother and to warn his country about the impending attack from other countries. With him he brought ideas. Ideas that are dangerous and against the law to have without explicit instruction from the Shogun. He gets captured by Lord Aya’s men soon after being dropped off on the beach. They discover the things that he is carrying, a sewing machine, books, and detailed plans on how to build trains and planes. He is also wearing blue jeans and has his hair cut short in the typical “American” cut. It is decided that he is a traitor and is going to be taken to Evo to be brought to justice. (IE: beheaded). Toru requests to be taken to his mothers’ village so he can say goodbye. Lord Aya agrees. Lord Aya’s daughter takes a keen interest in Toru. She secretly takes some of his books to read. She becomes, even more, intrigued the more she reads. While on the way to Evo, Toru begins to tell them his story. From being shipwrecked to being picked up by the Americans and spending time in their country. His visit to West Point and other cities in the country. This gets Lord Aya interested. He starts to believe Toru’s story of an impending attack. Can Toru convince the powerful leaders that he isn’t a traitor and help them prepare for what lays ahead?

This book was not what I was expecting at all. I guess that I thought it would be more exciting. More adventurous. Instead, I was rewarded with some super slow reading. It didn’t get exciting until the last 38 minutes of the book. And I know the exact time because I looked at the time left on the bottom of my Kindle. It was almost overwhelming. There were a few twists I didn’t see coming and a few that I had suspected from the very beginning. The real saving grace was the “note from the author” at the end that stated that a few of the facts were true in the book and based off of historical events. With all this being said I will probably read the next books in the series just to find out how Toru’s story continues.

Toru: Wayfarer Returns by Stephanie R. Sorensen is available for purchase now on Amazon and Barnes and Noble. Make sure to add it to your To Reads list on Goodreads and leave feedback for the author when you are finished.

Stay-at-home mom to two children and one toddler. I love to read, travel (haven't done it in a while), and cook. Born and raised in Three Rivers, Michigan and currently, reside in Northern Michigan. Can't wait to start sharing my book thoughts/ reviews with you!!
Previous BOOK REVIEW: Piper Perish by Kayla Cagan
Next BOOK REVIEW: The Bone Witch (The Bone Witch #1) by Rin Chupeco