BOOK REVIEW: Toward a Secret Sky by Heather Maclean 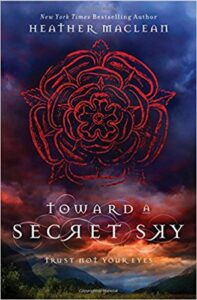 Shortly after 17-year-old Maren Hamilton is orphaned and sent to live with grandparents she’s never met in Scotland, she receives an encrypted journal from her dead mother that makes her and everyone around her a target. It confirms that her parents were employed by a secret, international organization that’s now intent on recruiting her. As Maren works to unravel the clues left behind by her mother, a murderous madness sweeps through the local population, terrorizing her small town. Maren must decide if she’ll continue her parents’ fight or stay behind to save her friends.

With the help of Gavin, an otherworldly mercenary she’s not supposed to fall in love with, and Graham, a charming aristocrat who is entranced with her, Maren races against the clock and around the country from palatial estates with twisted labyrinths to famous cathedrals with booby-trapped subterranean crypts to stay ahead of the enemy and find a cure. Along the way, she discovers the great truth of love: that laying down your life for another isn’t as hard as watching them sacrifice everything for you.

I really couldn’t tell you what made me want to read this book. Maybe the gorgeous cover in blues and purples with a flower that is in a Celtic knot. Perhaps it was the title: Toward a secret sky. It has quite the mysterious ring to it. Sounds like a true adventure book.

The books opens with Maren, the main character, burying her mother after a “freak” accident. Maren doesn’t understand how it could happen. Her mother worked for a computer company. She had a safe job. Maren is alone now. Her father died before she was born. To say Maren is devastated is an understatement. She is orphaned. As she is burying her mother the wind howls and there is an unearthly screech. The priest runs away in terror and three men in suits vanish. Maren assumes that it is a tornado but little does she know. Sent to live with her father’s parents in Aviemore, Scotland. Grandparents she has never even meet because they did not agree with the marriage of her parents. She feels utterly lost. Once she gets over her initial melancholy, she decides to go for a walk across the street from the house. While she is walking she encounters Gavin. Little does she know that Gavin is an angel and he will change her life in ways she never thought possible. She also meets a girl named Jo at the bakery counter in the local grocery store and they become best friends. Jo helps her dress for her first day at high school. She meets Anders Campbell, the local Lord. His family is very rich and has a huge house. Maren and Jo get invited to Anders birthday party. It’s a once in a lifetime thing. Jo tells Maren she has never been invited to the party before. While there, Jo gets a text that her Grandma had a stroke. She hurriedly exits the party leaving Maren alone with Graham, Anders cousin. Suddenly, Maren feels horrible, drunk, giggly. She realizes later that she was roofied at the party. It’s not until a few days later that she learns Jo is in serious condition at the local hospital. She finds out that Jo’s Grandma was perfectly fine and Jo lied to her. She has to find the antidote to help save her best friend. Will Gavin help her find it before it’s too late? Will Gavin toss aside all the angel rules to save Maren?

First off, the reason I only gave it 4 stars. The book didn’t get “good” until a little bit past 52%. That is a lot of book to read before anything spectacular happens. The other reason is that is really is a YA book. I knew it is a YA book to begin with. Sometimes, though, they teeter on the edge of YA and a little older than YA. The book was simply written and easy to understand. However, I thoroughly enjoyed the book. There is romance (a clean teenager romance) and friendship though there is a fair amount of death. If you are getting it for youngsters, there are important lessons about learning to love family members you haven’t even met. But more importantly, there is action and adventure. I will admit that I wasn’t entirely sure about this book as I read it. I started it with a 3 star rating and when I ended I had upped the ante to 4. I will certainly be on the lookout for the next two books in the series that the author has already said are coming. I have got to find out what happens to Maren and Gavin on their adventures.

Stay-at-home mom to two children and one toddler. I love to read, travel (haven't done it in a while), and cook. Born and raised in Three Rivers, Michigan and currently, reside in Northern Michigan. Can't wait to start sharing my book thoughts/ reviews with you!!
Previous BOOK REVIEW: Royal Bastards by Andrew Shvarts
Next BOOK REVIEW: The Little French Bistro by Nina George