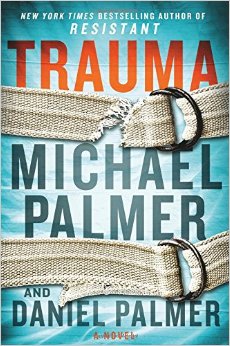 SYNOPSIS: (From Goodreads)
Dr. Carrie Bryant’s four years as a neurosurgical resident at White Memorial Hospital have earned her the respect and admiration from peers and staff alike. When given the chance of performing her first unsupervised brain surgery, Carrie jumps at the opportunity.

What should have been a routine, hours long operation, turns horribly wrong and jeopardizes her patient’s life. Emotionally and physically drained, Carrie is rushed back to the OR to assist in a second surgery. There, she makes a careless and tragic mental error resulting in irreparable brain damage to her second patient. With her confidence shattered, Carrie quits her residency and moves back home where her younger brother, Adam, a combat vet suffering from debilitating PTSD, also lives.

When Carrie learns about an experimental program at the VA Medical Center exploring the use of Deep Brain Stimulation (DBS) that could forever cure the emotional and memory trauma of PTSD, it seems like a way back into medicine. Carrie is apprehensive, but a chance meeting with David Hoffman, a reporter for the Lowell Observer writing a story on PTSD, helps her overcome any hesitation.

Her first surgery appears to be a success until her patient mysteriously vanishes. When a second patient also goes missing, Carrie employees the investigative skills of David, and together they descend into a labyrinth of murder and corruption. And the price Carrie might pay for asking the wrong questions could be her life.

REVIEW:
Murder mysteries are my thing, which I’ve said a million times. But medical mysteries are slowly becoming a favorite of mine. I’ve read Michael Palmer’s work before and was deeply saddened when I heard about his passing in 2013. Then I saw this gem, “Trauma”, that has been released with the hard work of his son Daniel Palmer. It’s like getting a treat from the grave of an amazing author!

“Trauma” follows the story of Dr. Carrie Bryant, a surgeon. It follows her story of failure, and her climb back to greatness, only to find her greatness might be assisting in something horrible she was unaware of. You would think medical thrillers are more like watching Grey’s Anatomy, but these books are so intense. I was on the edge of my seat and incredibly curious as to who was behind everything going on and what the outcome was going to be.

Just the word Palmer should bring about praise as Michael and Daniel are incredibly talented writers. This book proves the greatness of both. Inspiring, well written, great character development, and a well developed and thought out plot line. I cannot give it enough praise. Definitely a must read if you like mystery/thriller/dramas of any kind. Five stars!

Trauma can be picked up at your local book retailer or online at Barnes and Noble or Amazon. Also make sure to mark it on your Goodreads as TO READ.

Super Mom and Awesomely Nerdy Lady who can’t stand to sit still. I ran a successful online radio show that brought fans up close and personal with their favorite music, television and movie stars. Now, with my hilariously nerdy partners in crime, I have turned to my first love, BOOKS! A lover of books from a young age, I now always have a book on me no matter where I go. Books are my therapy. Twitter: @Kristin_Downer
Previous BOOK REVIEW & SPOTLIGHT: “Some Kind of Normal” by Juliana Stone
Next BOOK REVIEW: “The Heir” by Kiera Cass