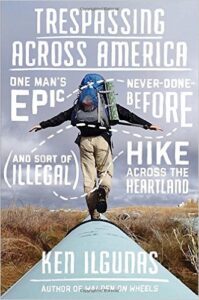 Told with sincerity, humor, and wit, Trespassing Across America is both a fascinating account of one man’s remarkable journey along the Keystone XL pipeline and a meditation on climate change, the beauty of the natural world, and the extremes to which we can push ourselves—both physically and mentally.

It started as a far-fetched idea—to hike the entire length of the proposed route of the Keystone XL pipeline. But in the months that followed, it grew into something more for Ken Ilgunas. It became an irresistible adventure—an opportunity not only to draw attention to global warming but also to explore his personal limits. So in September 2012, he strapped on his backpack, stuck out his thumb on the interstate just north of Denver, and hitchhiked 1,500 miles to the Alberta tar sands. Once there, he turned around and began his 1,700-mile trek to the XL’s endpoint on the Gulf Coast of Texas, a journey he would complete entirely on foot, walking almost exclusively across private property.

Both a travel memoir and a reflection on climate change, Trespassing Across America is filled with colorful characters, harrowing physical trials, and strange encounters with the weather, terrain, and animals of America’s plains. A tribute to the Great Plains and the people who live there, Ilgunas’s memoir grapples with difficult questions about our place in the world: What is our personal responsibility as stewards of the land? As members of a rapidly warming planet? As mere individuals up against something as powerful as the fossil fuel industry? Ultimately, Trespassing Across America is a call to embrace the belief that a life lived not half wild is a life only half lived.

I was fascinated by this book’s title when I saw it. Trespassing across America? How can that be? The United States is largely privately owned and, if it is not privately owned, people don’t understand the rules of right of way. I remember when I was on vacation in the Upper Peninsula, we got yelled at by a man who said we were trespassing on his property while walking about knee deep in Lake Superior. The author follows the proposed route of the Keystone XL Pipeline from Canada to Texas, trespassing on private property the whole way down. In 146 days, 1,900 miles, 8 states and Canadian provinces, 3 pairs of boots, and counting on the kindness of others he makes the trip. I will open with a fact with the greatest fact I have ever learned from a book. 18% of the greenhouse gas emissions in the USA are from… wait for it… cow farts. Yes, COW FARTS!! Amazing.

The story opens with the author, Ken, as he works in an oil camp in Alaska as a dishwasher. A job that started out as a couple weeks turned into a couple months and continued on from there. A spur of the moment trip with a friend that involved a bear, getting lost, and trespassing on government property to get back to the camp planted the idea of trespassing on the proposed route of Keystone XL in the first place. The months of planning and pushing back the trip for weddings and broken toes finally came to a close and the trip took place. Unfortunately, a previous event barred the friend from traveling over the Canadian border with him so he had to drop out. Ken decided to go through with the hike anyway. Boy, what a trip it was. As he does his hike he trespasses on people’s property, although sometimes the owners gave him permission when he would stop for water. He sleeps in stands of trees, ditches, next to railroad tracks and, as his trip progresses and it gets colder, churches, senior centers, and people’s homes. One thing he didn’t do unless it was unavoidable, was to ride in a car. Like the time he was a “suspect” in a string of break-ins and was driven out of the county by the police. A fair amount of people were extremely open to talking to Ken as he was making his trip. A couple of people even called ahead so that they could find a place for him to stay or to take a hot shower. He was extremely touched by the kindness of complete strangers.

The writing is fantastic. It manages to be incredibly detailed but not in an overly long-winded or dry way. It made me think a lot about the planet we live on. Did you know that “In the mixed grasslands of the north, a Nature Conservancy study listed 72 mammal species, 18 reptiles, 13 amphibians, 160 butterflies, 222 birds, and 1,595 grasses, sedges, and wildflowers.” At the beginning of the hike, Ken wasn’t sure what he stance on the pipeline was. By the time he got to Texas, seeing all he had seen, he was firmly against it. I am not going to get preachy because no one wants to read that in a book review. What I will say is take care of Mother Earth and she will take care of us.

I encourage you to pick up a copy of “Trespassing Across America” for yourself. Let us know what you think about it by tweeting us @NerdProbsBlog. The book is available on Amazon and Barnes and Noble.

Stay-at-home mom to two children and one toddler. I love to read, travel (haven't done it in a while), and cook. Born and raised in Three Rivers, Michigan and currently, reside in Northern Michigan. Can't wait to start sharing my book thoughts/ reviews with you!!
Previous BOOK REVIEW: “Feather Brained” by Bob Tarte
Next BOOK REVIEW: “Just Fall” by Nina Sadowsky