BOOK REVIEW: “Try Not To Breathe” by Holly Seddon 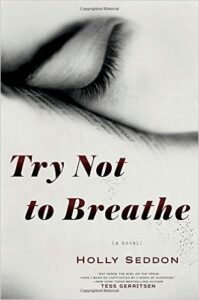 Amy Stevenson was the biggest news story of 1995. Only fifteen years old, Amy disappeared walking home from school one day and was found in a coma three days later. Her attacker was never identified and her angelic face was plastered across every paper and nightly news segment.

Fifteen years later, Amy lies in the hospital, surrounded by 90’s Britpop posters, forgotten by the world until reporter Alex Dale stumbles across her while researching a routine story on vegetative patients.

Remembering Amy’s story like it was yesterday, she feels compelled to solve the long-cold case.

The only problem is, Alex is just as lost as Amy—her alcoholism has cost her everything including her marriage and her professional reputation.

In the hopes that finding Amy’s attacker will be her own salvation as well, Alex embarks on a dangerous investigation, suspecting someone close to Amy.

Told in the present by an increasingly fragile Alex and in dream-like flashbacks by Amy as she floats in a fog of memories, dreams, and music from 1995, Try Not to Breathe unfolds layer by layer to a breathtaking conclusion.

“Try Not To Breathe” first caught my attention because of it’s cover. Follow up with a fantastic synopsis that gave tidbits away about what I was getting into, but not enough to spoil things… I was instantly drawn in. The story follows Alex, alcoholic and grasping at straws to stay afloat in life. Amy is also a journalist who happens to stumble on one of the great stories that every journalist would want to stumble on. A mystery that could potentially be solved even though police couldn’t. All you have to do is ask the right questions to the right people.

At first I was thinking the story was moving very slowly, but as I got more into it I realized that was realistic. Mysteries don’t get solved in a day. Especially by a barely functioning alcoholic who can only handle a half-a-day’s work. I quite enjoyed being able to see how one tragic story affected so many people. We get to see what is going on in Jacob’s life, the ex of the current vegetative Amy, Alex as she manages to make it through her days while making a deadline, and Amy who is kind of lost in her own mind not quite comprehending why it is she can’t talk to anyone. All these people who have very different lives and problems have stories that intertwine back from childhood into adulthood. These stories help tie loose ends up as the story comes to a surprising conclusion. I had my guess before the end, but I was wrong. Hard to admit. And hard to do.

Alex’s character is incredibly frustrating at times, but others you feel for her. The one problem I had was that she seemed to have had a hard life but you never quite get to hear why she is the way she is. I felt that there was more of a back story to all of it, but the author never clued us in. I really wished we got more of a backstory to understand Alex. While I was loving the character’s depths and how the story jumped from the past to the present, there was a single sentence in the book that irked me in just the wrong way and had me lower my rating that was flirting with a line between three and four stars. Without quoting directly, which I do not like to do for fear of giving any little inkling away to a reader, I will say it came off very rude and judgmental and completely unnecessary. It came regarding a side character who was very minimally mentioned in the book and the description was offensive. At least to me.

With that being said, this book would be a good read for those who love mystery and suspense. Not much thrill, but there a high level of anticipation as things slowly fall into place and you can see the outlines of a picture as you try to solve it before the author does. I enjoyed reading “Try Not To Breath” and getting to know these characters that have so many flaws and yet are so much like any person you walk by in the street. I will definitely check out future work of Seddon and not let any little things that bothered me stand in the way. Good debut from Seddon!

You can pick up your copy of “Try Not To Breathe” on February 23 from Ballantine Books. You can get a copy on Amazon or Barnes and Noble. Make sure to add it to your TO READ list on Goodreads for this year and leave your feedback for the author when you are done! Also check out Holly Seddon on her website HERE and follow her on Twitter!

Super Mom and Awesomely Nerdy Lady who can’t stand to sit still. I ran a successful online radio show that brought fans up close and personal with their favorite music, television and movie stars. Now, with my hilariously nerdy partners in crime, I have turned to my first love, BOOKS! A lover of books from a young age, I now always have a book on me no matter where I go. Books are my therapy. Twitter: @Kristin_Downer
Previous BOOK REVIEW: “Exit Unicorns” by Cindy Brandner
Next BOOK REVIEW: “The Life and Loves of a He Devil: A Memoir