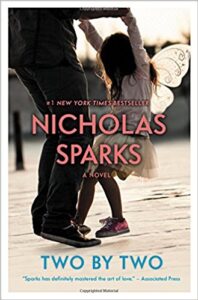 At 32, Russell Green has it all: a stunning wife, a lovable six year-old daughter, a successful career as an advertising executive and an expansive home in Charlotte. He is living the dream, and his marriage to the bewitching Vivian is the center of that. But underneath the shiny surface of this perfect existence, fault lines are beginning to appear…and no one is more surprised than Russ when he finds every aspect of the life he took for granted turned upside down. In a matter of months, Russ finds himself without a job or wife, caring for his young daughter while struggling to adapt to a new and baffling reality. Throwing himself into the wilderness of single parenting, Russ embarks on a journey at once terrifying and rewarding—one that will test his abilities and his emotional resources beyond anything he ever imagined.

Two by Two is nothing like the previous Nicholas Sparks books I have read. Let me back track a little bit. I loved Sparks’ books A Walk To Remember, The Last Song, Nights of Rodanthe, and so many more. I loved them. As time has passed, I have found I like the books less and less. I don’t know if it’s because I feel it’s written more for being made into a movie or because they just changed. However, I had heard so many good things about Two by Two that I just had to pick it up.

Two by Two tells the story of Russell Green as he weaves through, what I would like to call, hell while dealing with a growing little daughter and a emotionally detached wife. I feel like most Sparks books follow an outline. We meet the characters, everything is good, something tragic happens, and then we wind up with a semi happy or at least lesson learned ending. Two by Two was different. From the first chapter I remember talking to friends and family who had already read it and saying how different it was. It was happy. There was no smiles, aside from the absolute adorableness that was his daughter. I really enjoyed Russ, his family, and his daughter. Their characters made me smile and I just thoroughly liked them. His wife, on the other hand, annoyed me to the bitter end. I yelled at my book. I yelled at friends about the book. I threatened to stop reading the book. All because this character annoyed me to death. She was the epitome of rude, uncaring, selfish, and annoying! Had the other characters not been so great I’d have given up on this book.

While I was thoroughly frustrated with the first half of this book and the character I speak of above, and the behavior towards said character, the last third of this book was emotional! Rip your heart out, stomp on it, and run it over with a lawn mower emotional. I was unprepared after being frustrated with most of the book to have such a strong emotional reaction to the ending. I sobbed! Ugly sobbed! This book ripped me up. It was so sad and unexpected, although there were hints as to what was to come throughout. Sparks has this uncanny way of catching you completely off guard and destroying you all in a single page. Two by Two was no different.

If you are looking for your typical Nicholas Sparks book, look elsewhere. But if you are looking for his writing style and storytelling, but something a little harder to read and horribly devastating at the end, then Two by Two is for you. I’ll be checking out more from him as usual. Kind of curious to see where he goes now.

You can pick up Two by Two by Nicholas Sparks from Amazon, Barnes and Noble, or a bookstore near you. You can also check out more of Nicholas Sparks’ books on his website. Make sure to add the book to your To Reads list on Goodreads and leave feedback for Sparks when you are finished reading.

Super Mom and Awesomely Nerdy Lady who can’t stand to sit still. I ran a successful online radio show that brought fans up close and personal with their favorite music, television and movie stars. Now, with my hilariously nerdy partners in crime, I have turned to my first love, BOOKS! A lover of books from a young age, I now always have a book on me no matter where I go. Books are my therapy. Twitter: @Kristin_Downer
Previous BOOK REVIEW: Queso! by Lisa Fain
Next BOOK REVIEW: Lies She Told by Cate Holahan