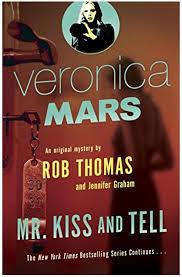 SYNOPSIS: (From Goodreads)
In the second book in the New York Times bestselling mystery series, Veronica Mars is back with a case that will expose the hidden workings of one of Neptune’s most murderous locations.

The Neptune Grand has always been the seaside town’s ritziest hotel, despite the shady dealings and high-profile scandals that seem to follow its elite guests. When a woman claims that she was brutally assaulted in one of its rooms and left for dead by a staff member, the owners know that they have a potential powder keg on their hands. They turn to Veronica to disprove—or prove—the woman’s story.

The case is a complicated mix of hard facts, mysterious occurrences, and uncooperative witnesses. The hotel refuses to turn over its reservation list and the victim won’t divulge who she was meeting that night. Add in the facts that the attack happened months ago, the victim’s memory is fuzzy, and there are holes in the hotel’s surveillance system, and Veronica has a convoluted mess on her hands. As she works to fill in the missing pieces, it becomes clear that someone is lying—but who? And why?

REVIEW:
I bet when Rob Thomas started releasing books that followed up on the much loved series “Veronica Mars”, the fans were stoked! As a newer fan of the Veronica Mars series, I was extremely excited to read this book. Rob Thomas and Jennifer Graham have taken characters that millions of people love and kept them coming back to us.

‘Mr. Kiss and Tell’ follows the story of Veronica Mars, private investigator who has grown up in Neptune, California, ran off to New York to become a lawyer, only to come back. Veronica is now playing house with on and off boyfriend Logan Echolls. She is working side-by-side with her father Kieth at Mars Investigations. She gets a side case to see about proving whether Grace Manning was lying or telling the truth on her rape that took place in the Neptune Grand. As Veronica gets closer to the culprit, relationships are tested, safety is definitely at risk, and answers are slowly answered.

I’m a HUGE Veronica Mars fan and this book lived up to my expectations. Thomas and Graham bring out the perfect replica of the characters we grew to love on the TV series. I could literally picture the locations, the characters, and the scenarios the book took us through. And true to Veronica Mars fashion, this book was filled with hilarity and mystery. An easy read that kept me searching for spare moments in my day to keep reading. As usual, two thumbs up, hats off, and whatever other phrases you can think of to Thomas and Graham for yet another great story. Anyone who is a fan of the series, or never read the series, should pick this book up. Anyone can enjoy it! Five out of five stars!

If you’d like to pick up this book, you can do so on Amazon or Barnes & Noble on January 20th. Go ahead and pre-order now even! Or you can pick it up in a store near you after release. Make sure to add it to your TO READ list on Goodreads.

Super Mom and Awesomely Nerdy Lady who can’t stand to sit still. I ran a successful online radio show that brought fans up close and personal with their favorite music, television and movie stars. Now, with my hilariously nerdy partners in crime, I have turned to my first love, BOOKS! A lover of books from a young age, I now always have a book on me no matter where I go. Books are my therapy. Twitter: @Kristin_Downer
Previous BOOK REVIEW: “The Gay Groom’s Guide” by Robert Blackmon
Next BOOK REVIEW: “More Than This” by Jay McLean