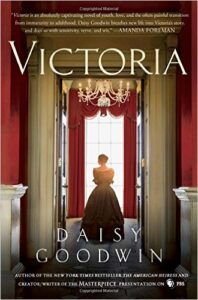 “They think I am still a little girl who is not capable of being a Queen.”

Lord Melbourne turned to look at Victoria. “They are mistaken. I have not known you long, but I observe in you a natural dignity that cannot be learnt. To me, ma’am, you are every inch a Queen.”

In 1837, less than a month after her eighteenth birthday, Alexandrina Victoria – sheltered, small in stature, and female – became Queen of Great Britain and Ireland. Many thought it was preposterous: Alexandrina — Drina to her family — had always been tightly controlled by her mother and her household, and was surely too unprepossessing to hold the throne. Yet from the moment William IV died, the young Queen startled everyone: abandoning her hated first name in favor of Victoria; insisting, for the first time in her life, on sleeping in a room apart from her mother; resolute about meeting with her ministers alone.

One of those ministers, Lord Melbourne, became Victoria’s private secretary. Perhaps he might have become more than that, except everyone argued she was destined to marry her cousin, Prince Albert of Saxe-Coburg and Gotha. But Victoria had met Albert as a child and found him stiff and critical: surely the last man she would want for a husband….

Drawing on Victoria’s diaries as well as her own brilliant gifts for history and drama, Daisy Goodwin, author of the bestselling novels The American Heiress and The Fortune Hunter as well as creator and writer of the new PBS/Masterpiece drama Victoria, brings the young queen even more richly to life in this magnificent novel.

I have never read anything by Daisy Goodwin. I do have her book The American Heiress but I hadn’t read it yet. After reading Victoria I will be reading that one as soon as I can. I really liked her writing and it being Historical Fiction made it even more enjoyable. I had started to watch the TV show with the same name until I saw this book to read on NetGalley. I immediately stopped watching until I had finished it. The author mentions she wrote the book at the same time she was writing the TV series. So the book and the show are very very close. A word for word match it seems. At least the episodes I watched were. That is a rare thing. Most things get construed differently as they are transferred from book to show. For example, The Mortal Instruments movie. I couldn’t even finish that one.

The book opens as Victoria is awaiting word of the death of the current king, her grandfather. She is only 18 as she takes the throne to rule England. She continued to rule until her death in 1901. The book, however, doesn’t cover her whole reign. Only from the time she found out she was Queen until she proposes to her future husband Prince Albert. She immediately moves her household to London and into the palace. She is tired of being away from everything and wants to be in the hustle and bustle of the city. She begins to fall for her Prime Minister, Lord Melbourne who she calls Lord M unless she is angry and then she uses his full title. During her first weeks as Queen, Victoria accuses her mother’s advisor, Conroy, of having inappropriate relations with his assistant, Lady Flora, resulting in a pregnancy. Victoria insists on an exam to see if Lady Flora’s virginity is intact While they discover that Lady Flora is still, in fact, a virgin, the cause for the abdominal swelling is, in fact, a large tumor and her life will soon be cut short. Victoria’s supporters are angry at her for causing this women’s life to come to an end. They no longer come out to cheer her as she goes for her rides. Eventually, they forgive her. I will let you find out about the rest of Victoria’s life that the author wrote about and maybe you will enjoy the book as much as I did.

My big knock on the book, and it was enough that it lost a star for it, was that it was broken into 4 books. However, each book was no further into the future. It just picked up right where it left off on the previous page. If it was suddenly like a month or more in the future I could understand the use of books but not in this context. The other thing, though honestly it really wasn’t a huge issue, was that it ended when she proposed to Prince Albert. I would have liked to know more about their story. The book was wonderfully written and keeps you wanting more. There is a slight romantic angle to it, with Lord M and Prince Albert, but nothing that is over the top. It’s just enough so you know they have feelings for each other. She really writes the relationship between Queen Victoria and her mother beautifully. You know they love each other but you also know there is animosity between them. It is nothing disrespectful however and, in the end, they come to an understanding. I hope that Daisy Goodwin will eventually continue the story of Victoria. I will be first in line to get that book.

You can pick up yuur own copy of Victoria by Daisy Goodwin. It is available on Amazon and Barnes and Noble as well as in a local bookstore near you. Make sure to add the book to your To Reads list on Goodreads and leave feedback for the author. Daisy Goodwin has written many more books that can be purchased. Check out her website HERE for more information!

Stay-at-home mom to two children and one toddler. I love to read, travel (haven't done it in a while), and cook. Born and raised in Three Rivers, Michigan and currently, reside in Northern Michigan. Can't wait to start sharing my book thoughts/ reviews with you!!
Previous BOOK REVIEW: The Drop by Dennis Lehane
Next BOOK REVIEW: Wherever There Is Light by Peter Golden