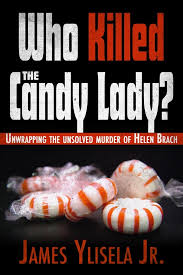 SYNOPSIS: (Full synopsis can be found on Goodreads)
Thirty-five years ago, Helen Brach walked out of the Mayo Clinic in Rochester, Minnesota, and vanished without a trace. By all accounts, the 65-year-old heiress to the E.J. Brach & Sons candy fortune was in good heath, though she fretted about her expanding waistline. At 9 a.m. on Thursday, Feb. 17, 1977, she left the clinic with orders to lose twenty pounds, and headed for the airport and her return flight home. On the way she stopped at a boutique and used her American Express card to purchase $41 worth of cosmetics. From that moment, the details of Helen Brach’s life and presumed death moved from fact to speculation, and they have been shrouded in mystery ever since. But the Brach mystery, the coldest of cold cases, remains an open murder investigation at the Glenview Police Department.

REVIEW:
Reading a non-fiction book, especially one about an unsolved murder, is much different from reading a fiction novel. As a huge fan of mystery and thriller books, I started ‘Who Killed the Candy Lady: Unwrapping the Unsolved Murder of Helen Brach’ by James Ylisela Jr. with an open mind to see if I could get into this. I loved it. Have I mentioned that I also love true crime?

‘Who Killed the Candy Lady’ follows the story of Helen Brach, heiress to the Brach candy fortune (You know you’ve eaten those mints!). In 1977, after leaving the Mayo Clinic from a checkup, Brach disappeared. You would think decades later there would have been a closed case and solved. Unfortunately, this one sits open.

This story has so many people involved and not even I could come up with a conclusion. I have some guesses on who is guilty, but as a closed case, we may never know the real answer. Ylisela is a journalist and teacher in the Chicago area. He was able to depict this case in a way made interesting to the readers. It felt like I was reading a novel. In my opinion, that made this book so much more appealing to the masses. Not everyone is interested in real-life crime or documentaries. By writing this in the way he did, Ylisela made it an interesting read and I wanted to find out the answers. Unfortunately, there are no answers seeing as the case is open. But, for a case I knew very little about to start, I now can name suspects, those who have been put behind bars (innocent or guilty?), and those were just victims of a huge conspiracy.

Ylisela did a fantastic job of drawing me in and hooking me. It only took me a day to read this book because I could not put it down. Great descriptions and flashbacks so you understood every part of the story. He did a great job researching and giving all the information without attempting to sway the readers opinion. A fantastic writer and great storyteller. 4 out of 5 stars. A definite recommendation.

Make sure you can pick up ‘Who Killed the Candy Lady?: Unwrapping the Unsolved Murder of Helen Brach’ online at Amazon or Barnes & Noble, and mark it on your TO READ list on Goodreads.

Super Mom and Awesomely Nerdy Lady who can’t stand to sit still. I ran a successful online radio show that brought fans up close and personal with their favorite music, television and movie stars. Now, with my hilariously nerdy partners in crime, I have turned to my first love, BOOKS! A lover of books from a young age, I now always have a book on me no matter where I go. Books are my therapy. Twitter: @Kristin_Downer
Previous BOOK REVIEW: “Crash & Burn” by Lisa Gardner
Next BOOK REVIEW: ‘Gone Too Far’ by Natalie D. Richards