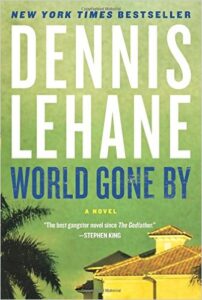 Dennis Lehane, the New York Times bestselling author of The Given Day and Live by Night, returns with a psychologically and morally complex novel of blood, crime, passion, and vengeance, set in Cuba and Ybor City, Florida, during World War II, in which Joe Coughlin must confront the cost of his criminal past and present.

Ten years have passed since Joe Coughlin’s enemies killed his wife and destroyed his empire, and much has changed. Prohibition is dead, the world is at war again, and Joe’s son, Tomás, is growing up. Now, the former crime kingpin works as a consigliore to the Bartolo crime family, traveling between Tampa and Cuba, his wife’s homeland.

A master who moves in and out of the black, white, and Cuban underworlds, Joe effortlessly mixes with Tampa’s social elite, U.S. Naval intelligence, the Lansky-Luciano mob, and the mob-financed government of Fulgencio Batista. He has everything—money, power, a beautiful mistress, and anonymity.

But success cannot protect him from the dark truth of his past—and ultimately, the wages of a lifetime of sin will finally be paid in full.

Dennis Lehane vividly recreates the rise of the mob during a world at war, from a masterfully choreographed Ash Wednesday gun battle in the streets of Ybor City to a chilling, heartbreaking climax in a Cuban sugar cane field. Told with verve and skill, World Gone By is a superb work of historical fiction from one of “the most interesting and accomplished American novelists” (Washington Post) writing today.

I’m a huge Dennis Lehane fan. He’s never disappointed me yet and World Gone By is no exception. Written with a master’s hand, World Gone By has all the touches that only Dennis Lehane can give: sexiness and mystery with enough twists and turns to keep you guessing until the very end and somehow still surprise you.

World Gone By is the third book in the Coughlin series, with The Given Day (Coughlin #1) and Live By Night (Coughlin #2) preceding it. Joe Coughlin has gone from mob boss to adviser in the shadow of World War Two after willingly giving up the reins to his empire. With Prohibition over and World War Two just beginning, the gangsters in Florida are feeling the shift. Previously strong alliances are becoming shaky and those once trusted are now under clouds of suspicion. Joe is feeling the pressure to keep the peace but when a hit goes out on his life, everything he’s worked for begins to collapse underneath him.

At times sexy and always engaging, World Gone By is the shocking conclusion to the Coughlin series. In his masterful way, Lehane keeps you guessing all the way until the end. He concludes the saga in a way that you know it’s over but you’re still wanting more–more than he may be able to deliver. Again, the “F” word feels redundant but somehow, the story would be lacking without it. There’s so much action that you have to flip back a few pages just to make sure you have the details right.

“World Gone By” by Dennis Lehane is available on Amazon, Barnes and Noble, or in a bookstore near you. You can also add it to your Goodreads To Read list and make sure to leave your feedback for the author when you are finished. Also check out more books by Dennis Lehane, especially Live By Night, which we previously reviewed.