BOOK TOUR/BOOK REVIEW: “The Girl from The Savoy” by Hazel Graynor 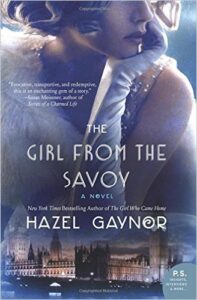 Presenting a dazzling new historical novel … The Girl From The Savoy is as sparkling as champagne and as thrilling as the era itself.

Sometimes life gives you cotton stockings. Sometimes it gives you a Chanel gown …

Dolly Lane is a dreamer; a downtrodden maid who longs to dance on the London stage, but her life has been fractured by the Great War. Memories of the soldier she loved, of secret shame and profound loss, by turns pull her back and spur her on to make a better life.

When she finds employment as a chambermaid at London’s grandest hotel, The Savoy, Dolly takes a step closer to the glittering lives of the Bright Young Things who thrive on champagne, jazz and rebellion. Right now, she must exist on the fringes of power, wealth and glamor—she must remain invisible and unimportant.

But her fortunes take an unexpected turn when she responds to a struggling songwriter’s advertisement for a ‘muse’ and finds herself thrust into London’s exhilarating theatre scene and into the lives of celebrated actress, Loretta May, and her brother, Perry. Loretta and Perry may have the life Dolly aspires to, but they too are searching for something.

Now, at the precipice of the life she has and the one she longs for, the girl from The Savoy must make difficult choices: between two men; between two classes, between everything she knows and everything she dreams of. A brighter future is tantalizingly close—but can a girl like Dolly ever truly leave her past behind?

When asked to read this book I was thrilled. It sounded right up my alley. Historical Fiction with a whiff of romance. It does not disappoint. I found myself, like so many of the books I read, saying just one more page. Oh, the chapter is almost finished? Let’s just finish it up.

The book revolves around three main characters: Dorothy (Dolly), Teddy, Dolly’s boyfriend who goes to war and Loretta (Etta), a beautiful stage actress. Dolly was raised on a farm but dreams of something more. She wants to be a stage actress and a dancer. She has had so many failed auditions that she has basically given up. She now works at the gorgeous hotel, The Savoy. She still wants to fulfill her dreams. On her first day of work at The Savoy, she crashes into Loretta’s brother, Perry. From there, their paths are destined to cross again. Loretta was raised in a rich family by her father who was an Earl. She was sent to posh schools and is friends with people of consequence. She still wanted something else. She volunteered as a nurse during the war. While it was done mostly to aggravate her parents, she found that she had an aptitude for it and actually enjoyed it. One day she agreed to fill in for a friend at the theater. People loved her and her career took off from there. Both of these women harbor a dark secret that either few or no people know about. Lastly, there is Teddy. Teddy went off to war sending back love letters to Dolly. However, their plans don’t come to be. Throughout the story, we see Teddy in a hospital bed. He is being read the letters from Dolly. He has no recollection of who she is but from the letters he guesses that she was and is something special. I am going to stop there. The book weaves a wonderful story around each of these characters lives.

While I thoroughly loved this book, the reason I am giving it 4 stars is because of the transitions. She writes about 3 characters. Just as you are getting into the one characters story she suddenly switches to another one of the main characters. She does return to the stories but by that time you have almost forgotten what was happening. Other than that the book was excellent. It is well researched about the time period that it revolves around. The prologue takes place as Teddy is leaving for war and then it picks up some time after the war has ended in the 1920’s. The authors descriptions of the places in the book are amazing. She actually transports you back in time. In your minds eye, you can see the glittering chandeliers, the beautiful men and women and the bustling London streets. I will certainly read another book by this author in the future.

You can pick up your own copy today on Amazon or Barnes and Nobles and start reading! Also make sure to add it to your To Reads list on Goodreads and also make sure to leave your feedback for the author and tell them how you liked it. Author Hazel Graynor has released multiple other books, so make sure to check them all out here on Amazon as well.

Stay-at-home mom to two children and one toddler. I love to read, travel (haven't done it in a while), and cook. Born and raised in Three Rivers, Michigan and currently, reside in Northern Michigan. Can't wait to start sharing my book thoughts/ reviews with you!!
Previous BOOK REVIEW: “The Crown” by Kiera Cass
Next BOOK REVIEW: “Daddy Dearest” by Paul Southern