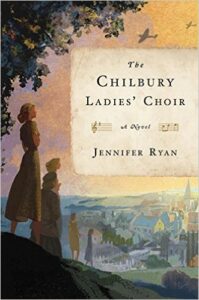 “Just because the men have gone to war, why do we have to close the choir? And precisely when we need it most!”

As England enters World War II’s dark early days, spirited music professor Primrose Trent, recently arrived to the village of Chilbury, emboldens the women of the town to defy the Vicar’s stuffy edict to shutter the church’s choir in the absence of men and instead ‘carry on singing’. Resurrecting themselves as “The Chilbury Ladies’ Choir”, the women of this small village soon use their joint song to lift up themselves, and the community, as the war tears through their lives.

Told through letters and journals, The Chilbury Ladies’ Choir moves seamlessly from budding romances to village intrigues to heartbreaking matters of life and death. As we come to know the struggles of the charismatic members of this unforgettable outfit — a timid widow worried over her son at the front; the town beauty drawn to a rakish artist; her younger sister nursing an impossible crush and dabbling in politics she doesn’t understand; a young Jewish refugee hiding secrets about her family, and a conniving midwife plotting to outrun her seedy past — we come to see how the strength each finds in the choir’s collective voice reverberates in her individual life.

In turns funny, charming and heart-wrenching, this lovingly executed ensemble novel will charm and inspire, illuminating the true spirit of the women on the home front, in a village of indomitable spirit, at the dawn of a most terrible conflict.

I make no effort to hide my love of historical Fiction. I think my favorite genres go: Non-Fiction/Travel, Historical Fiction, then usually YA. This book, in a way, ticked all of my boxes. It has a storyline for young adults, it has Historical Fiction and it kind of has Travel since it is set in England during the start of WWII.

The book follows the lives of several individuals. Mrs.Tilling, a local nurse who sends her son off to war as an RAF pilot. Kitty Winthrop as well as her sister Venetia. Silvie a Czech refugee who is living with the Winthrop’s. A Midwife named Edwina and occasionally Colonel Mallard, who is a billings patron of Mrs. Tilling. The story revolves around these characters. It tells of Mrs. Tilling having a farewell party the day before her son David leaves for the war. Her slowly becoming less of a doormat and more of a strong and more independent women. Edwina is a Licensed Midwife who gets involved into a baby switching plot that blows up in her face. Kitty is an almost 14-year-old girl who has an amazing singing voice. She fancies herself engaged to Henry, who thinks he is destined to marry Venetia, Kitty’s sister. Venetia, is a very promiscuous and flouncy woman. She thinks she is the catch of the city Chilbury. She sets her sights on Alastair Slater and she always gets what she wants. Sometimes no matter the cost. All of these women and their stories weave together when they form the Chilbury Ladies Choir when the Vicar puts an end to the other choir due to all the men going off to war. They learn to support each other. The music soothes their souls and singing brings peace and bolsters morale.

This book is the feel good book that we need in this day and age. While it has sadness, it also has joy, adventure, spies and romance. My only knock on this book, and why it’s only 4 stars instead of the full 5, is the bouncing from journal form to letter form is annoying. While the story does continue its flow from one to another, the abrupt switch is jarring. At the end, the author tells us that this story is a fruition of her grandmother telling her war stories from the town she grew up in. So she decided to make it the basis of the book. I will be watching for more books from the author in future.

Pick up your copy of The Childbury Ladies’ Choir by Jennifer Ryan on Amazon and Barnes and Noble. Also make sure to add the book to your Goodreads To Read list and leave feedback from the author when you are done.

Stay-at-home mom to two children and one toddler. I love to read, travel (haven't done it in a while), and cook. Born and raised in Three Rivers, Michigan and currently, reside in Northern Michigan. Can't wait to start sharing my book thoughts/ reviews with you!!
Previous BOOK REVIEW: One Moment by Kristina McBride
Next BOOK REVIEW: After the Fall by Kate Hart