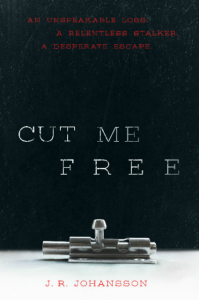 Seventeen-year-old Charlotte barely escaped from her abusive parents. Her little brother, Sam, wasn’t as lucky. Now she’s trying to begin the new life she always dreamed of for them, but never thought she’d have to experience alone. She’s hired a techie-genius with a knack for forgery to remove the last ties to her old life. But while she can erase her former identity, she can’t rid herself of the memories. And her troubled history won’t let her ignore the little girl she sees one day in the park. The girl with the bruises and burn marks.

That’s when Charlotte begins to receive the messages. Threatening notes left in her apartment–without a trace of entry. And they’re addressed to Piper, her old name. As the messages grow in frequency, she doesn’t just need to uncover who is leaving; she needs to stop whoever it is before anyone else she loves ends up dead.

Stories of abuse and severe mental angst always bring me down. Sometimes it is because they are written in a depressing way, while other times it seems like there is no light for the characters involved. J.R. Johansson managed to take a story threaded with horror and grief and make it enlightening, riveting, and hard to put down. For lack of a better phrase, Cut Me Free was incredible.

Cut Me Free follows the story of Piper, or Charlotte depending on how you want to address her. Piper is running from her past as fast as she can, but doesn’t seem to be able to escape it. In the process of healing herself and trying to build a life, Piper comes across a few people who turn out to help her more than she probably helps them all while fighting the demons of her past. This book has everything from the “hero”/cute boy to a second victim who needs even more help than the lead character herself.

You will be stuck to the pages and you flip through each chapter dying to know what is next. I found myself reading faster and faster as I tried to undo the knot of information that was just at the tip of my fingers, but constantly keeping me guessing. Johansson knows how to draw the readers in, hook them, and never let them go. I found myself relating to the characters even though my life was nothing like theirs. Cam, the leading male character, is a mix of the perfect brotherly figure or the perfect boyfriend, depending on how you are viewing him in the story, and the supporting characters can easily be compared to your friends or family members. Being able to relate to the characters, even if not the actual story taking place, made this story that much more enjoyable.

My hat is off to Johansson for writing such a great book about a subject most people do not want to talk about. The characters are well-explained, their demons real, the story flows smoothly, and keeps you on the edge of your seat the entire time. Five stars is hard to earn from me, but this story (and author) definitely deserve it. A chilling truth that sometimes a rose can rise up from the ashes.

Cut Me Free is not available until January 27, 2015. Keep up with the release on J.R. Johansson’s site HERE! Also keep up with her on Twitter at JennJohansson.

Also mark Cut Me Free on Goodreads on your To Read shelf HERE!

Super Mom and Awesomely Nerdy Lady who can’t stand to sit still. I ran a successful online radio show that brought fans up close and personal with their favorite music, television and movie stars. Now, with my hilariously nerdy partners in crime, I have turned to my first love, BOOKS! A lover of books from a young age, I now always have a book on me no matter where I go. Books are my therapy. Twitter: @Kristin_Downer
Previous BOOK REVIEW: ‘Accidents of Marriage’ by Randy Susan Meyers
Next BOOK REVIEW: ‘Since You’ve Been Gone’ by Mary Jennifer Payne