BOOK REVIEW: A Penny for the Hangman by Tom Savage 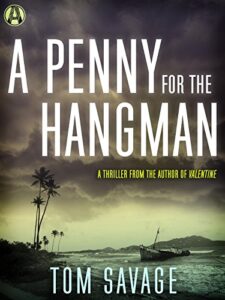 SYNOPSIS:
In Tom Savage’s chilling novel of suspense, an ambitious reporter is beckoned to an island paradise for the story of a lifetime. But this scoop might just be the death of her.

Fifty years ago, on the Caribbean island of St. Thomas, two teenagers born to privilege were convicted of slaughtering their parents in cold blood. Today the men are free and a Hollywood movie has been made about the murders. For Karen Tyler, an eager New York journalist, the case is irresistible. She has been invited to the Virgin Islands for an interview that’s too good to pass up . . . and sounds too good to be true.

Karen packs her bikini and her digital recorder and follows an ingeniously designed trail that leads her to a wealthy, mysterious figure. The man claims to be one of the notorious boys, but Karen soon learns that all is not as it seems. On this isolated utopia of sun and surf, a young reporter far from home fights for the truth—and for her life. Because the shocking secret behind the infamous atrocities has remained hidden all these years. And the killing isn’t over yet.

‘A Penny for the Hangman’ follows the story of New York City based journalist, Karen, who gets the opportunity of a lifetime to get the “real” story behind a set of murders that took place in 1959. She follows the lead and it seems she may get the story she was looking for… or does she get way more than she has bargained for? Savage took the lead heroin in the story and made her relatable. As a reader, I felt I could relate to this character, which made the story more real. I experienced the terror she felt, the thoughts she thought were ideas that crossed my mind. I also found myself trying to figure out where Savage was taking the story the whole way. While I managed to guess a few things, Savage managed to completely blow my mind as the story came to a peak and, for lack of a better phrase, all hell broke loose.

This book is the epitome of a nail biter. Savage has a keen sense for what the readers wants and brings a reality out of every story. ‘A Penny for a Hangman’ could easily be a story ripped straight out of the headlines. This could be you or someone you know. This could be a story you follow on the news. The reality of the situation makes this novel that much more terrifying.

If you are a fan of real life scenarios, truly frightening situations, and simply a really good read, then you should pick up this book. I find it hard to give a book five stars, but this intrigued me so much that I just have to! Great job to Mr. Savage for writing such a good piece of work and I look forward to more.

‘A Penny for the Hangman’ was released on October 7th and is available for purchase. You can pick it up at Barnes & Noble for your Nook or on Amazon for your Kindle for only $2.99. You can also read more about Tom Savage on his website! All of his books are listed as well if you want to read more!

Super Mom and Awesomely Nerdy Lady who can’t stand to sit still. I ran a successful online radio show that brought fans up close and personal with their favorite music, television and movie stars. Now, with my hilariously nerdy partners in crime, I have turned to my first love, BOOKS! A lover of books from a young age, I now always have a book on me no matter where I go. Books are my therapy. Twitter: @Kristin_Downer
Previous BOOK REVIEW: The Best Bar Trivia Book Ever: All You Need for Pub Quiz Domination by Michael O’Neill
Next INTERVIEW: Robert Art Talks “Homeland & Philosophy”