When you think of identity theft, you automatically say “it won’t happen to me.” You may or may not be wrong. It can happen to you. And to one author, it did. JP Bloch has his PhD and is a professor of Criminology… and now an author. His book “Identity Thief” draws from personal experiences and knowledge he has learned over the years from teaching, school, and having his own identity stolen. I got the chance to talk to him about his book and the process of writing it. This is what he had to say… 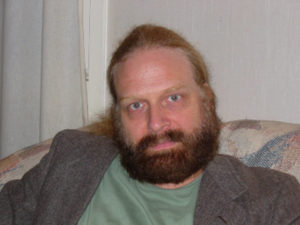 KRISTIN: How did you go about wanting to get your PhD, teaching, and then writing?

JB: I’ve always wanted to write. When I was a teenager I thought I’d be a famous writer overnight. If you told me then I’d get a Ph.D. and become a professor, I’d have thought you were crazy. But as I progressed along my twenties, I got tired of starving so I thought I’d go to college and become a social worker, still writing on the side. But I really liked sociology for its own sake, and decided to get a Ph.D. From the moment I started teaching as a grad student I loved it. For awhile I thought I wasn’t “meant” to be a writer. But then when I landed a tenure track job after completing my dissertation, the writing bug bit me again. Someone told me years ago I’d have two careers, and she was right. And my knowledge of humanity as a social scientist has helped my fiction writing.

KRISTIN: Tells us a little about your book “Identity Theft” for those who do not know.

JB: It’s about a down-on-his luck computer geek who succumbs to the temptation to steal the online identity of an affluent, very full of himself person. The geek tells himself he’ll only steal money from his victim this one time, but one thing leads to another, he meets a beautiful women, and all sorts of stuff like blackmail and murder end up happening. The victim is pretty much an SOB, so in a way you feel more for the thief than the victim. The two men take turns telling the story from their respective points of view. It’s a page-turner but it does have something to say about identity itself, and how fragile it can be as the two men in some ways change places.

KRISTIN: It seems like the common thought is, “Well it won’t happen to me”, which is reflected a bit in your story through the “victim”. Why do you think people feel that way?

JB: Well, I used to think that myself, until someone stole my identity. I still don’t know how it happened, but now I am very, very careful. I treat my garbage almost as a sacred object, because all those junk mail things we casually throw away can lead to someone stealing your name. Identity theft is the fastest growing crime in America. The victim in the novel is so sure of himself he even posts his social security number, which is one of the worst mistakes anyone can make. Many people don’t realize how easy it can be to get a credit card, for example, in someone else’s name. And then from there you can get another card, and start getting other forms of ID, and so on. Technology has altered older ideas of privacy. People simply have to accept this, and make smarter choices about some very small things.

KRISTIN: In “Identity Theft” you have a lot of different characters, and even when you think you may know who the “bad guy” is and who the victims are, you may or may not be wrong. When going in to write this, did you already have the entire story mapped out and who would do what?

JB: I had a general idea that I wanted a plot with a lot of twist and turns. But as writer, whether it’s a scholarly article or popular fiction, I never start with an outline. It would spoil the fun and limit the possibilities. I’m not the first person to say this, but when you write fiction it’s as if the characters become real people, and it’s almost as if you’re following them around. Of course, speaking of technology, word processing makes the writer’s job so much easier. If I insert a plot change on Page 75, it may mean I have to change something back on Page 42. And it’s easy to do this on a computer. Back in the days of the typewriter I wouldn’t have had fun at all. My motto as a writer should be: “Thank God for technology.”

KRISTIN: What do you think it is about this book that people will be drawn to?

JB: So far, the feedback and reviews have been music to my ears, with a couple of exceptions. If you like books in which everyone is nice, Identity Thief may not be for you. I’m a big fan of film noir. I like complex characters who do complex things to each other. If you enjoy characters who commit a lot of duplicity or worse, this book is for you. The plot has a lot of surprises, and so many people so far have said they couldn’t put it down, which pleases me. I want people to enjoy themselves when they read it. Some people have also said that it gave them a little something to think about in terms of self, and what is truth, and all that deep fun stuff. This pleases me, too.

KRISTIN: Having studied identity theft and being a victim of it, do you feel that it is a crime based on boredom or desperation?

JB: You know, even though the thief in my novel is desperate, he is also quite bored with his life. Though he feels like he had no choice but to become an identity thief, of course there are always other options. He really does it because if he doesn’t start to have a life of excitement he’s going to totally fall apart. Some research has shown that criminals often are people who need more stimulation than most people do. So actually I’d say identity theft is more about boredom than desperation. Good question!

KRISTIN: Where is this book available for readers to pick it up?

JB: Amazon is a good place for both paperback and Kindle. Barnes and Noble also carries it. Those are the major vendors. If anyone is into it, they can send their copy to Bacon Press, and I’ll sign it for them.

KRISTIN: Where can we keep up with you online? Are you on social media?

JB: I am the proud owner of the Social Misfit Times, a new blog “for people who scratch their heads a lot.” (http://jpblochauthor.blogspot.com/) I’m also on Facebook as a human being and more recently as an author (https://www.facebook.com/jpbfan) and Twitter (https://twitter.com/JPBlochauthor) , and some other things I go to less often. There’s only so many hours in a day, and I always have about million things going on at once.

There you have it everyone. If you want to pick up the book, make sure to swing over to Amazon or Barnes & Noble website for the easiest access. Also make sure to follow Bloch on all of his social media sites listed above to keep up with him and his upcoming projects. Also make sure to check out our review of the book HERE!

Super Mom and Awesomely Nerdy Lady who can’t stand to sit still. I ran a successful online radio show that brought fans up close and personal with their favorite music, television and movie stars. Now, with my hilariously nerdy partners in crime, I have turned to my first love, BOOKS! A lover of books from a young age, I now always have a book on me no matter where I go. Books are my therapy. Twitter: @Kristin_Downer
Previous BOOK REVIEW: “Identity Theft” by JP Bloch
Next BOOK REVIEW: “Princess Cupcake Jones Won’t Go To School!” by Ylleya Fields